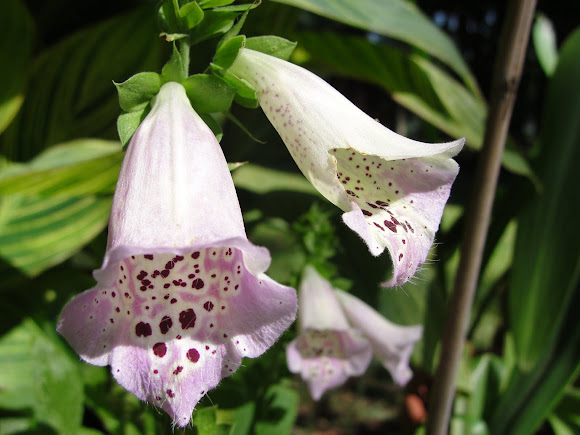 "Digitalis ( /ˌdɪdʒɪˈteɪlɪs/ or /ˌdɪdʒɪˈtælɪs/) is a genus of about 20 species of herbaceous perennials, shrubs, and biennials that are commonly called foxgloves. This genus was traditionally placed in the figwort family Scrophulariaceae, but upon recent reviews of phylogenetic research, it has now been placed in the much enlarged family Plantaginaceae. This genus is native to western and south western Europe, western and central Asia, and northwestern Africa. The scientific name means "finger-like" and refers to the ease with which a flower of Digitalis purpurea can be fitted over a human fingertip. The flowers are produced on a tall spike, are tubular, and vary in colour with species, from purple to pink, white, and yellow. The best-known species is the "Common Foxglove", Digitalis purpurea. This is a biennial plant which is often grown as an ornamental plant due to its vivid flowers. These range in color from various purple tints through various shades of light gray, and to purely white. The flowers can also possess various marks and spottings."

"Digitalis thrives in acidic soils, in partial sunlight to deep shade, in a range of habitats including open woods, woodland clearings, moorland, and heath margins, sea-cliffs, rocky mountain slopes and hedgebanks.It is commonly found on sites where the ground has been disturbed, such as recently cleared woodland, or where the vegetation has been burnt."