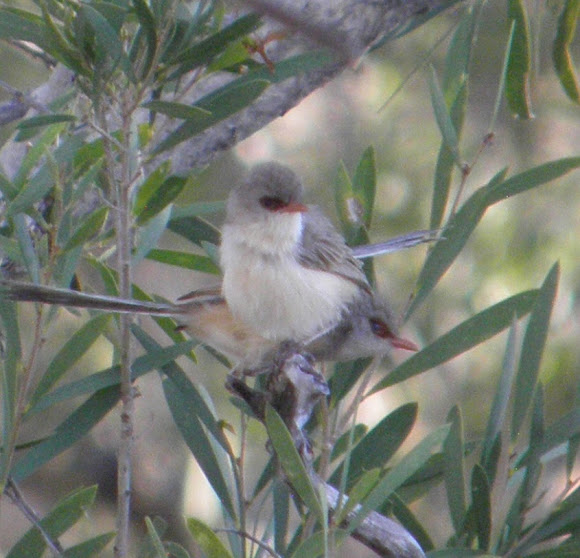 These are females. This wee bird has a light gray crown that extends down over its back. It has a white chin and throat following into a white body. Around (I think) blue eyes is a dark patch, either black or dark brown. In 2018, the Purple-backed Fairy-wren was finally declared a new species, after being incorrectly labelled a Variegated Fairy-wren prior to the new discovery (they look very similar). You can read about the news here: https://ebird.org/australia/news/2018-eb... "Females and juveniles have predominantly grey-brown plumage, although females of two subspecies have mainly blue-grey plumage." (Wiki)

Sitting, preening on this log at the Mankajarra Wetlands.

There are four sub-species of which M. a. rogersi which is located in the Kimberley region and North-Western Australia. I spotted them flitting through the grass calling out to each other before they perched on this stick for some preening.

I forgot to mention that these are both females which, thanks to Ernst is what ultimately helped me to identify them! Thank you Ernst :)

Yeah, I think they are wrens as well Ernst. And females...hadn't thought about that :) The photos are blurry because I was so excited about seeing them (and I haven't seen them before)!