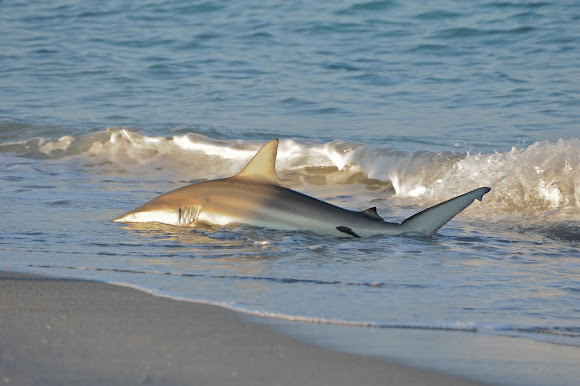 When we pulled up to the ranger stand at the entrance to the parking lot at MacArther Beach State Park a little whiteboard said "we have spinner sharks off the beach today". I'd seen pictures of huge groups of sharks in the clear water waves before. It wasn't like that, but there was still a lot of action in the water. We started seeing jumps and spins as soon as we got to the water's edge. Most were about 50-100 yards offshore, some further, none closer. Sometimes several in a row, then 5-10 mins of nothing, then a few more. Never could quite catch one mid leap-spin...ended up with a few splashes, then got tired of trying. Walking up the beach later we saw this one just caught by a fisherman. Impressive up close. Released by puling him by the tail back down into the surf.

what a shot! amazing!

thanks Judy! it was the perfect time of day - late afternoon.

Beautiful lines and lighting on this photo. It catches my eye every time I look at it.

You can see the fishingrope coming from it's mouth in the first 2 pics. So i guess they cought it. Nice shots anyway!

Are they catching fish, or being caught?

Leopard sharks are usually small that close to the beach. I'm a snorkler from way back, and I've never minded swimming with sharks in the shallows. On the other hand, sea lions who pop-up right in your face or pelicans diving into the water just meters away have scared the bejebers out of me.

Don't know that I'm ready to be catching Leopard sharks and then releasing them in deep water...yikes. I was pretty happy to have a 300mm for these pics actually!

Very cool. I used to occassionally catch Leopard sharks while surf fishing. I always took them out to deep water to release, otherwise they tended to swim the wrong way and beach themselves.