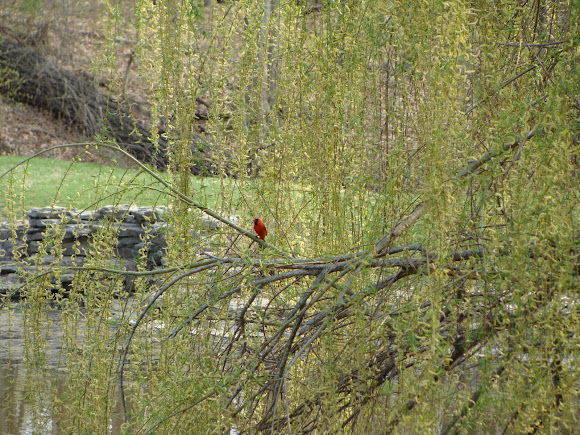 The Northern Cardinal (Cardinalis cardinalis) is a member of the cardinal family of birds in North America. The bird's name comes from the red-robed Roman Catholic Cardinals. Its crested head is also said to resemble a bishop's mitre. Cardinals have been also referred to as redbirds and Virginia nightingales. Cardinals were once popular cage birds for their bright color and rich, varied songs.

Cardinals are abundant across the eastern United States from Maine to Texas and in Canada in the provinces of Ontario, Quebec, and Nova Scotia. Their range extends west to the U.S.-Mexico border and south through Mexico to the Isthmus of Tehuantepec, northern Guatemala, and northern Belize. They were introduced to Bermuda in 1700. They have also been introduced in Hawaii, and Southern California. Their natural habitats are woodlands, suburbs, gardens, swamps and thickets.

This is a medium sized bird that is between 21 and 23 cms (8 - 9 inches) long, with a wingspan between 25 and 31 cms (10 - 12 inches). They weigh between 42 and 48 g (1.48 - 1.69 oz). Males are bright, deep red with black faces and coral/red beaks. Females are a fawn/light brown color, with mostly grayish-brown tones & slight reddish tint in their wings and tail feathers, also with a bright coral/red beak. Both possess prominent raised crests and strong beaks. Young birds (male & female) are the color of a mother bird until the fall, when they will molt and grow their adult feathers.