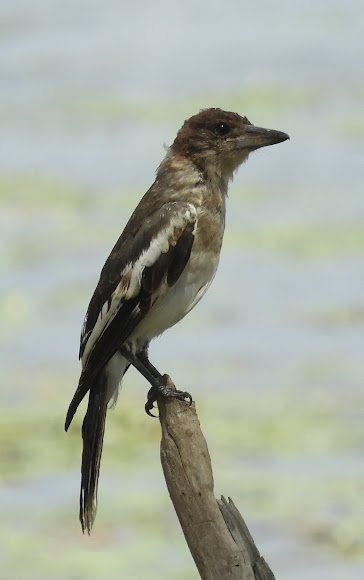 The black areas of the adults, are brown on the young. Eyebrow is buff-brown. On very young birds, there is no sign of the darker 'bib', on the off-white throat. Length:- 320-360mm.

At Kingaroy's beautiful Gordonbrook Dam..... Where you perch..On the picnic table, to see what you can 'nick' Or fly..Through and out amongst the trees, to see what's there to pick. On the posts and on the ground, seeking for - something Or pestering your parents, to see if they'll 'give in'.

Called also:- Organbird; Break-o'day Boy; Black-throated Butcherbird or Black-throated Crow-shrike. First described by John Gould, in 1837. Of the order Passeriformes - perching or songbirds. Comprising over half the worlds birds is this most successful, diverse and widespread order. Distinguishing features:- Distinctively cleft palate, three free forward toes and strong irreversible hind toes, flexed by free tendons, tiny feather aftershafts, vestigial intestinal caeca and a complexly structured and muscled voice box (syrinx). This allows passerines to defend their territory by 'throwing' the voice, so avoiding energy-expensive fighting and also to sing. Complex nests. Variably marked eggs and the young are naked and helpless. There's about 65 to 70 families, with opions varying, in two main groups: true songbirds (oscines) with completely muscled syrinx fused into a drum and subsongbirds (suboscines) with incompletely formed or muscled syrinx. There's about 33 in Australia, only one of which is suboscine (Pittas) The Butcherbird is Family Cracticidae, along with Currawongs. They are strong-bodied, medium-sized to large raptorial songbirds, in black or pied plumage. They feed arboreally by perch-and-pounce or by hopping and walking on the ground, for live or scavenged food. Bills are long, straight and hook-notched, shortly bristled and all black or with grey-white base. Feet are short to long, scaled to smooth. Tails are long, contrastingly tipped. Wings are rounded or pointed, with well-developed tenth outer primary, flying in deep undulations or in fast direct flap and glide. Solitary to gregarious and flocking. Mostly monogamous and also paired permanently. The female usually does the building of the nest and the incubation. Male does help with feeding of the young. Lined with rootlets and fine grass Upright in the fork of a tree Five metres or more above the ground A stick-cupped nest you'll see Within are three to five oval dull green eggs (33x24mm) Spotted brown or black And from out of one of these dull green eggs This little 'bloke' did hatch He's/She's not quite yet like Mom or Dad As the colour is still coming But nevertheless it matters not As even now he/she looks becoming Soon the brown will turn to black But the thick beak NOW gives a mighty CLACK And the strong claws to prey (mice;insects;reptiles.) cause deadly harm But they've perched so gently, on my arm. And although the voice hasn't made it - yet I know it won't be long Before the fluted pipings Will far-carry its full-blown song And over the years I've stood 'neath a tree And 'dueted' with one of these young And though he/she has surely shared this with me I've no idea of just what has been sung. References:- Reader's Digest Complete Book of Australian Birds.