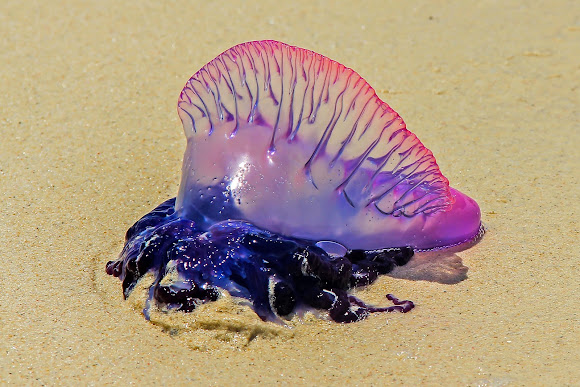 Despite its appearance, the Portuguese man o' war is not a jellyfish but rather a siphonophore, which, unlike jellyfish, is not actually a single multi-cellular organism. A siphonophore is a colonial organism made up of specialized individual animals (of the same species) called zooids or polyps. These polyps are unable to survive independently, and therefore have to work together and function like an individual animal. It gets its name from the uppermost polyp, a gas-filled bladder, which sits above the water and somewhat resembles an old warship at full sail.

Congrats for the SOTW. Excellent details and colours.

Great sotting Yaniv,i love these guys :-) congrats on the well deserved SOTW and thanks for sharing

One of the best photos of Physalia I've ever seen- Congratulations on the SOTW. Well deserved !

Yaniv and Sarit Wainer 3 years ago

Thank you very much for choosing us again for the SOTW! :-)

Thanks for the additions Yaniv and Sarit! And congratulations, your Portuguese man o' war has been voted Spotting of the Week:

"Behold the colorful Portuguese man o' war (Physalia physalis), our Spotting of the Week! While it could be mistaken for a jellyfish, the Portuguese man o' war is a siphonophore (Order Siphonophora), a colonial organism made of specialized individual animals called zooids or polyps. The man-of-war comprises four separate polyps and get its name from the top polyp (pneumatophore), a gas-filled chamber somehow resembling an old warship. The man-of-war's tentacles are are covered with venom-filled nematocysts used to paralyze and kill its preys and which can inflict a very painful sting to humans. Our Project Noah Rangers team praised this spotting for the quality of the photographs and information provided, the completeness of the spotting, and the interest of the organism and the location it was spotted at".

Yaniv and Sarit Wainer 3 years ago

Thank you very much for nominating our spotting for SOTW! We really appreciate it!!! :-)
We updated the habitat section with a more detailed description of the actual place where we spotted the man o' war.

Congratulations on your nomination Yaniv and Sarit Wainer! As per our guidelines could please briefly describe the actual habitat where the spotting was made, as opposed to generic information? Thanks in advance!
http://www.projectnoah.org/faq

Beautiful color on this one.