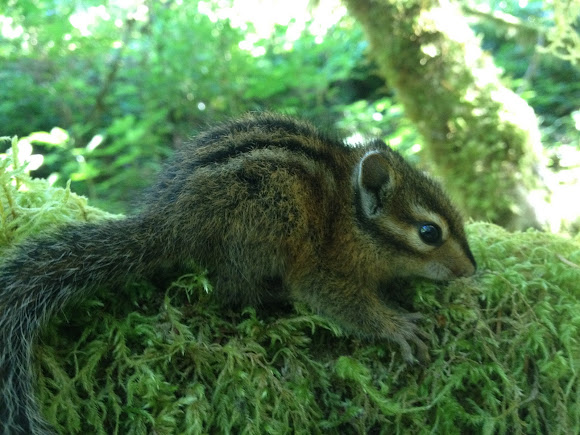 Townsend's chipmunk (Neotamias townsendii) is a species of rodent in the squirrel family Sciuridae. It lives in the forests of the Pacific Northwest of North America, from British Columbia through western Washington and Oregon. A large chipmunk, adults can be 36 cm (14 in) from nose to tail. In much of its range, it is the only chipmunk; it can be identified by its tail which is grayish above and reddish below, and by its brown coloration with indistinct tawny stripes. (wikipedia)

Townsend's chipmunk hibernates in regions where the winter is harsh, but in other parts of its range that have a more mild climate it can be active year-round. It is omnivorous, eating a variety of plants and insects and even birds' eggs. Townsend's chipmunks in the Oregon Coast Range have higher population densities in areas with dense shrubbery, especially salal (Gaultheria shallon). In the summer and early fall, Townsend's chipmunks eat blackberries, salal berries, and thimble berries. In the late fall, they eat acorns, huckleberries, maple seeds, thistle seeds, grain seeds, grass, roots, and conifer seeds. (wikipedia)

Townsend's Chipmunk is named after John Kirk Townsend, an early 19th-century ornithologist. (wikipedia) My cat Bella caught this little guy, and I did my best to set him free. Watch the youtube video to see this little guy in action.