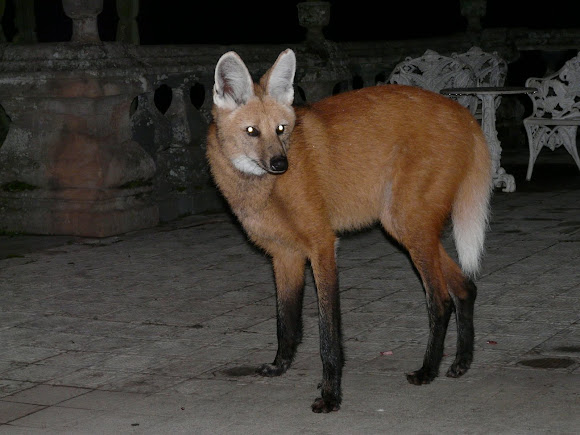 Largest canid in South America. The Maned Wolf has often been described as "a Red Fox on stilts" owing to its similar coloration and overall appearance, though it is much larger than a Red Fox and belongs to a different genus. The adult animal stands 67 to 107 cm (26 to 42 in) tall at the shoulder and weighs 20 to 34.09 kg (44 to 75.2 lb). The maned wolf is the tallest of the wild canids. The long legs are probably an adaptation to the tall grasslands of its native habitat.Fur of the Maned Wolf may be reddish brown to golden orange on the sides with long, black legs and a distinctive black mane. The coat is further marked with a whitish tuft at the tip of the tail and a white "bib" beneath the throat. The mane is erectile, and is typically used to enlarge the wolf's profile when threatened or when displaying aggression.

A priest at a remote church in Parque do Caraca, which has rooms for guests, coaxed these rare animals out of the forest with scraps of meat and bones. Though they are not habituated to humans, they come most nights to grab a quick bite.

Gorgeous photos. Adding Brazil to my list of places to go

Yes, Lobo Guara. I also have this pic on my website but yes, the priest does it for all the guests. So it's quite possible you saw someone else's similar photo.

Do you have this on a blog somewhere too I swear I have seen this before. Maybe the Priest does this for all the guests?

That was a while ago. Do you know how long the wolves have been coming around? Unfortunately I did not hear them bark.

Yes, in 1987... .This church is located in Santa Bárbara city, Minas Gerais State.
Have you heard them barking ? It´s like a dog.

Yes, you're right. I've added that to my notes now. Have you been there?

Dan, I bet you took this picture at Santuário do Caraça !

Yes, Jonathan and monkey-mind, you're right.

yep, that´s what I meant with walking like a bear.

Dan Doucette, is this the wolf that when walking move simultaneously right hand and legs? then left side....???

that´s right! I love this feature - videos about behavior are important I think

Great Video!!! It is really more fun to actually see them moving!!! I am a photographer but I sure like small video clips! Makes it all more real!!!!

he is going like a bear, using the same side

I've added video to this spotting. It's a little dark but at least you can see the wolf in action.

Carolina and Matt, yes it does look like a fox on stilts!
Monkey-mind, yes they are rare. I only spotted them in Caraca after 2 months in Brazil.

You know Matthew, you're right. I also thought it looked more like a fox than a wolf.

It has such long legs, it's like a wolf-super-model!

Though its tail, head and colour are much more similar to a fox than a wolf

I've added some more photos to this spotting.

The look so much like our foxes... but on stilts!

Love your story with your picture.