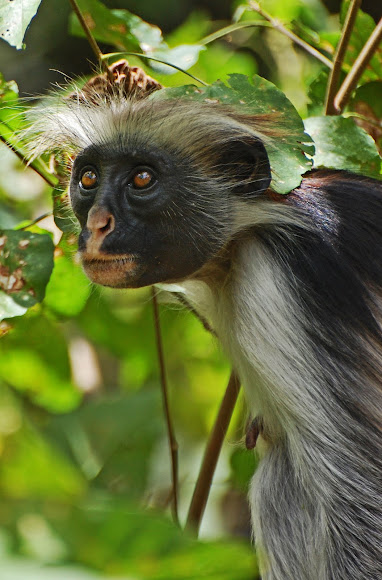 Female red colobus monkey in the first shot. Female carrying young in the second shot, then more individuals from the same group and a male in the last shot.

This wonderfully expressive female red colobus was photographed at the border of the Jozani National Park in Zanzibar, and was part of a group of one male with several females and youngsters. Colobus are unique in their lack of an opposable thumb compared to other primates. An endangered species edemic to the island of Zanzibar, the red colobus is now the target of major protection efforts.

Wow that shows them at their best. Brilliant shots.

Daniele, I never saw this series of photos - they are superb! I am so sorry that the protection efforts have now been undermined. I hope you will keep posting spottings in the future.

Thanks for your kind comment animaisfotos. The male in the last pic you're referring to definitely cut an impressive figure. Looking back at this pic I realize these animals were observing me as much as I was observing them...

The last picture just took me out of my feet. Wonderful capture. Thanks for sharing.

all of your pics are beautiful, well done

Congrats Daniele, this made Spotting of the Day!

Thanks Matthijs! I have re-uploaded: male is now the 6th shot.

Have edited this spotting to add a few more pictures from the same group of animals, including female caring for her baby and male of the group (5th shot).