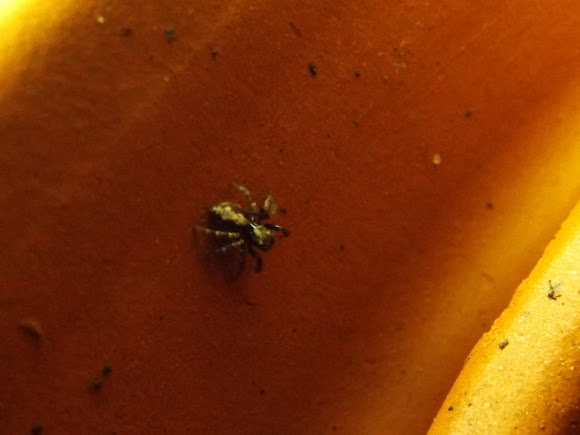 Males reach a body length of three to four millimeters, with females up to five mm. This species is very similar to Pseudeuophrys erratica, which is rarer and found below the bark of trees on forest fringes. As P. lanigera is mostly found inside buildings, adults can be found even in deep winter. It is better suited to the dry climate of modern concrete architecture than other salticids in the area like Salticus scenicus. Adults can be found the whole year

he species is widespread in much of England, with a few records in Wales and Scotland and is apparently spreading north, probably partly assisted by man. It is widespread in western and central Europe as far north as Denmark.his species was first recorded in Devon in 1930 and since that time has spread rapidly northwards (Merrett 1979). E. lanigera is strongly associated with man, and is one of the few spiders that is characteristic of roofs and walls of buildings. It may be found away from this habitat, in woodlands for example, but these records are rare. The spider has been observed using a drop-and-swing behaviour (pers. obs.), which is successfully used by other species to become airborne. An aeronautic habit would explain, in part, its successful migration from Devon northwards to Scotland. Due to the favourably warm microclimate provided by central heating in houses, the spiders seem to continually produce young year-round (Clarke 1972). Adult females can be found in all months, but males may not survive the winter.

i will get other macro shots of this little madame, she hides in a plant pot every-time i try to shoot her.