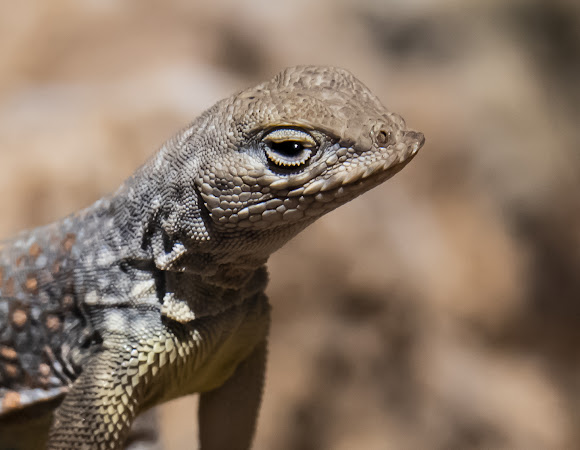 This lizard was about 7” long, nose to tip of the tail. It has reddish-orange spots on its back, with dark band across the underside just in front of the rear legs, per the photos above. It has no visible ear opening, which apparently gave rise to its name.

This lizard was spotted in the Boyce Thompson Arboretum which is in the Superstition Mountains west of Superior, AZ. This is a part of the Sonoran Desert. It was doing “push-ups” just off a trail in the foothills of the Arboretum.

In researching online, the greater earless lizard is more active in the sun at higher temperatures (up to 101.5 degrees F), than most lizards (80 to 95 degrees F). It was about 90 degrees at the time of our spotting. As well, like many lizards the Earless can escape predators by breaking off its tail if it is snagged. Interestingly, this lizard has a tail which appears to have been lost and regenerated…it is short, almost stubby, with more faded colors. Life is not easy in the Sonoran Desert.

Thanks Antonio and Felix!

Thanks Daniele...this recognition is much appreciated!

Great series Jim,congrats on the well deserved SOTD and thanks for sharing

Nice to have you back Jim, and congratulations, your Greater Earless Lizard is our Spotting of the Day:

"Endemic to the southwestern United States, this Greater Earless Lizard (Cophosaurus texanus) is our Spotting of the Day! Earless lizards (genera Cophosaurus and Holbrookia) are small lizards characterized by having no external ear openings. This is presumed to be an adaptation to desert life as to avoid getting sand in when burrowing in. Earless lizards can still perceive sounds and vibrations via bone conduction.
To learn more about hearing in reptiles: https://buff.ly/2HPFLTO "