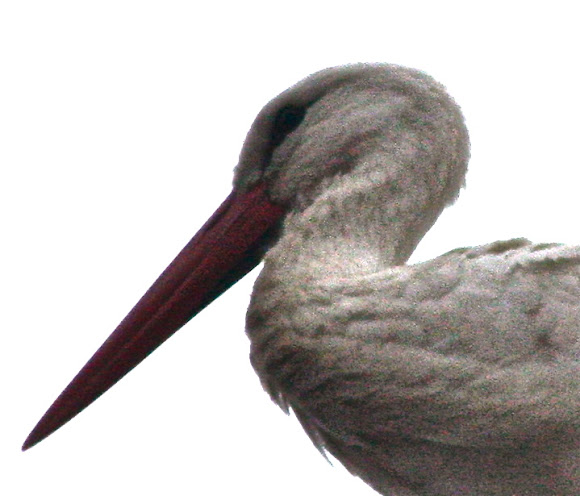 The White Stork is a large bird. It has a length from the tip of its beak to the tip of its tail of 100–115 cm (39–45 in), a wingspan of 195–215 cm (77–85 in), and a weight of 2.3–4.4 kg (5.1–9.7 lb). Like all storks, it has long legs, a long neck, and a long, straight, pointed beak. The sexes are identical in appearance, except that males are larger than females on average. The plumage is mainly white with black flight feathers and wing coverts; the black is caused by the pigment melanin. The breast feathers are long and shaggy forming a ruff which is used in some courtship displays. The irises are dull brown or grey, and the peri-orbital skin is black. The adult has a bright red beak and red legs,[8] the coloration of which is derived from carotenoids in the diet.

White Stork has a wide although disjunct summer range across Europe, clustered in the Iberian peninsula and North Africa in the west, and much of eastern and central Europe, with 25 percent of the world's population concentrated in Poland, as well as parts of western Asia.