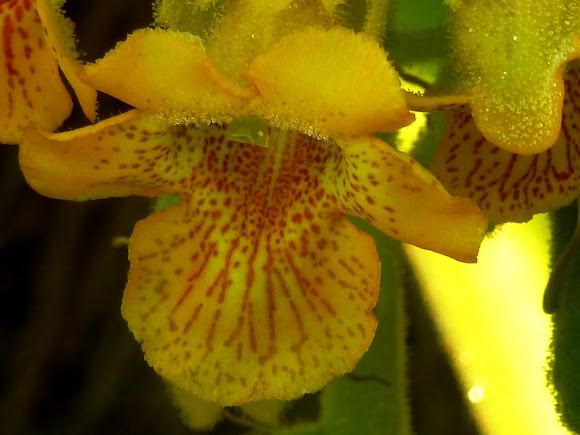 A protocarnivorous plant (sometimes also paracarnivorous, subcarnivorous, or borderline carnivore), according to some definitions, traps and kills insects or other animals but lacks the ability to either directly digest or absorb nutrients from its prey like a carnivorous plant. The morphological adaptations such as sticky trichomes or pitfall traps of protocarnivorous plants parallel the trap structures of confirmed carnivorous plants.these plants are on the evolutionary path to true carnivory, Ibicella lutea (/aɪbᵻˈsɛlə ˈluːtiə/; syn. Martynia lutea, Proboscidea lutea) is a species of flowering plant known by the common names devil's claw, unicorn plant, martynia, proboscis flower, and ram's horn. It grows in dry conditions, such as those in desert regions. It is native to South America, but has become established as a non-native species in various semi-arid regions around the world, including Southern Africa and the Central Valley of California. The plant is aromatic, with an unpleasant scent. It produces short, glandular hairs over most of its aerial surfaces and is coated in sticky resin. Insects often become stuck in the slimy exudate and die, but the plant does not have digestive enzymes and does not absorb nutrients from the insects. The plant can be considered protocarnivorous, but it is not carnivorous. The name "devil's claw" comes from the shape of the double-clawed seed pods. The sharp-toothed claws on the pods attach to large animals that brush against them, acting as the plant's method of dispersal

Note the ant stuck on the resin in the second picture. How it uses the ant/insects is not known.The red markings on the flower guide the bees to the nectaries inside the flower.