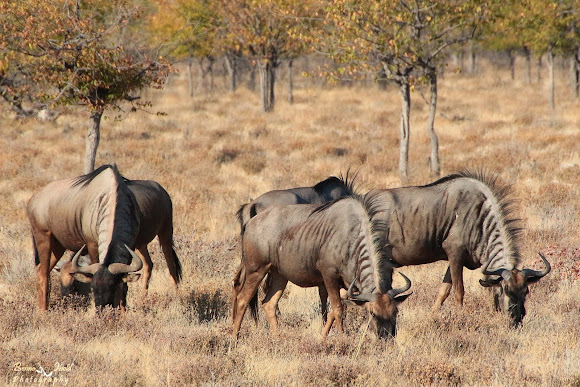 This species of wildebeest is even-toed, horned, greyish-brown ungulates superficially resembling cattle. Males are larger than females and both have heavy forequarters compared to their hindquarters. They have broad muzzles, Roman noses, shaggy manes and tails

Wildebeest inhabit the plains and open woodlands of parts of Africa south of the Sahara. The black wildebeest is native to the southernmost parts of the continent. Its historical range included South Africa, Swaziland and Lesotho, but in the latter two countries it was hunted to extinction in the 19th century. It has now been reintroduced to them and also introduced to Namibia where it has become well established. It inhabits open plains, grasslands and Karoo shrublands in both steep mountainous regions and lower undulating hills at altitudes varying between 1,350 and 2,150 m (4,430 and 7,050 ft).[31] In the past, it inhabited the highveld temperate grasslands during the dry winter season and the arid Karoo region during the rains. However, as a result of widespread hunting, it no longer occupies its historical range or makes migrations, and is now largely limited to game farms and protected reserves. The blue wildebeest is native to eastern and southern Africa. Its range includes Kenya, Tanzania, Botswana, Zambia, Zimbabwe, Mozambique, South Africa, Swaziland and Angola. It is no longer found in Malawi but has been successfully reintroduced into Namibia. Blue wildebeest are mainly found in short grass plains bordering bush-covered acacia savannas, thriving in areas that are neither too wet nor too dry. They can be found in habitats that vary from overgrazed areas with dense bush to open woodland floodplains.[ In East Africa, the blue wildebeest is the most abundant big game species, both in population and biomass. It is a notable feature of the Serengeti National Park in Tanzania, the Masai Mara Game Reserve in Kenya and the Liuwa Plain National Park in Zambia.

Thank you so much. So my
guide didn't know that himself. I will correct that when I am at home.

Black gnus have white tails! These are blue gnus, the species more commonly found in Namibia.