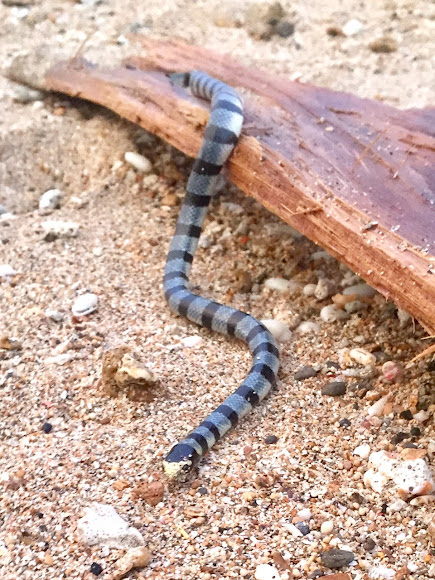 The snake has distinctive black stripes and a yellow snout, with a paddle-like tail for use in swimming. Total large about 60cm approx. The head of a banded sea krait is black, with lateral nostrils and an undivided rostral scale. The upper lip and snout are characteristically colored yellow, and the yellow color extends backward on each side of the head above the eye to the temporal scales. The body of the snake is subcylindrical, and is taller than it is wide. It has an upper surface that is typically a shade of blueish gray, while the belly is yellowish, with wide ventral scales that stretch from a third to more than half of the width of the body. Black rings of about uniform width are present throughout the length of the snake, but the rings narrow or are interrupted at the belly. The midbody is covered with 21 to 25 longitudinal rows of imbricate (overlapping) dorsal scales. The tail of the snake is paddle-shaped and adapted to swimming. (Wikipedia)

Spotted using mobile phone during a walk in Sanur Beach - Bali at evening still with daylight time (around 5pm). Laticauda colubrina spends much of its time underwater in order to hunt, but returns to land to digest, rest, and reproduce. The banded sea krait is widespread throughout the eastern Indian Ocean and Western Pacific. It can be found from the eastern coast of India, along the coast of the Bay of Bengal in Bangladesh, Myanmar and other parts of Southeast Asia, to the Malay Archipelago and to some parts of southern China, Taiwan, and the Ryukyu Islands of Japan. The species is also common on Fiji and other Pacific islands within its range. Vagrant individuals have been recorded in Australia, New Caledonia, and New Zealand.

Commonly known as the banded sea krait, colubrine sea krait, or yellow-lipped sea krait, is a species of venomous sea snake. It has very potent neurotoxic venom which it uses to prey on eels and small fish. Because of their affinity to land, banded sea kraits often encounter humans, but the snakes are not aggressive and only attack in self-defense. Kingdom: Animalia Phylum: Chordata Class: Reptilia Order: Squamata Suborder: Serpentes Family: Elapidae Subfamily: Laticaudinae Genus: Laticauda Species: L. colubrina

I managed to return back the snake to the water as at that time some turists still were on the beach, just thinking it was the best option for the snake...