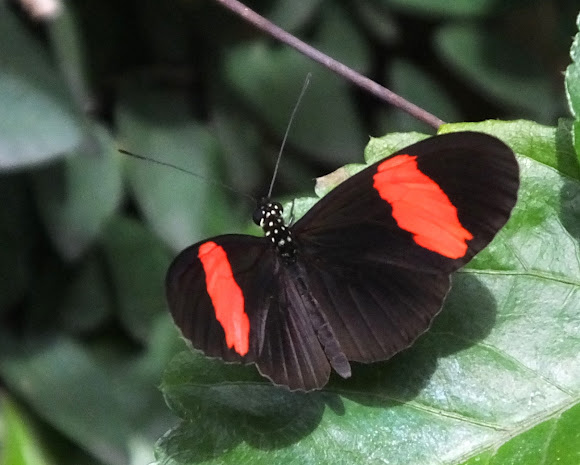 About 7 cm in wingspan. Black as a base with red markings on wings and four red dots where the wing attaches to the thorax. This one has small white dots on his head and back and a faint white stripe only to be seen from the underside of its wings. Its flight is jerky and fluttery.

I have been seeing this kind of butterfly a lot in our garden for the past months. When looking it up on Google it seems that most Heliconius erato have a white stripe on their lower wings but "ours" have not. Is ours a different kind and are those several butterflies and do we have one family who produces the same colouring, or is it one and the same individual? Wiki says..."H. erato is one of the few butterflies that collects and digests pollen, conferring considerable longevity to the adults (several months)" This butterfly is poisonous which is why it has the red warning colours on its wings.