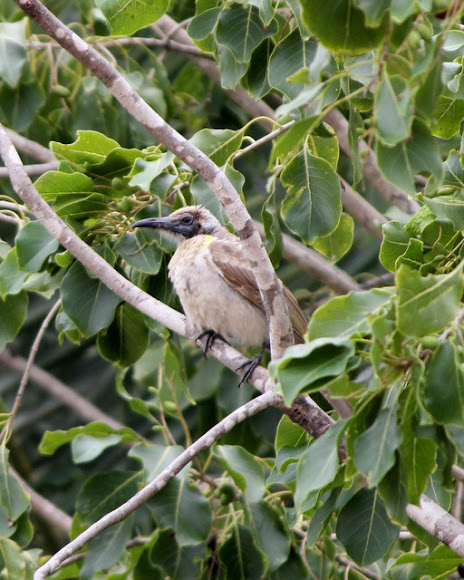 It is brown-grey above, paler grey on neck and collar, with a distinctive bare blue-grey face patch, and pale greyish white below with fine white streaking on the breast. Females are slightly smaller, but otherwise similar. Young birds are browner above, with more yellowish colourings on chin and throat. It is a conspicuous and noisy bird, often chasing other honeyeaters, and is mostly seen higher up in trees.

Near water, mainly in open forests and woodlands dominated by eucalypts. Also found in wetlands, monsoon forests, mangroves and coastal heathlands. Only extend into arid zone along waterways. Mostly tropical, but also common in semi-arid zone. It will also be seen in gardens and orchards. Widespread in northern and eastern Australia, the Little Friarbird is also found in New Guinea. Found from Broome, Western Australia across the Top End to Queensland, and down the coast of New South Wales as far as the Central Coast. Widespread in Western New South Wales and northern Victoria along Murray River, to South Australia.

Thank you very much! I looked it up and it is a Little Friarbird.

Could be a Friarbird a relatively large honeyeaters?!?