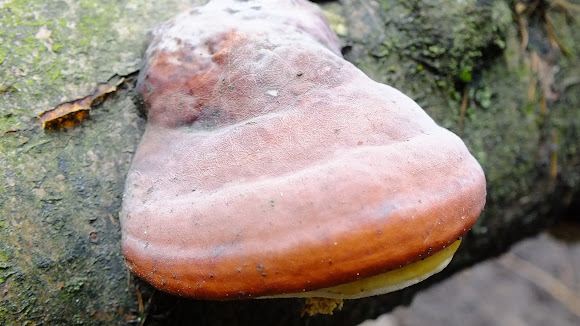 Annual layers of tubes build up to produce a large bracket, usually in the form of a woody hoof-shaped structure 8 to 25 cm across and typically 5 to 10 cm deep at the centre of the attachment area. The upper infertile surface, appearing as though varnished in young brackets but gradually dulling with age, is mainly grey with annual zone rings and ridges, but there is nearly always an orange or red growing band near the rim and a thinner white band right at the outermost edge. Inside the fruiting body the flesh is hard and pale brown, while the spore-bearing surface has minute roundish pores, spaced at 3 to 4 per mm. The pores are cream at first and bruise yellowish buff, but with age they become brown.

This pale-spored perennial polypore is found on living or dead conifers and occasionally on birches.

Spotted on a dead conifer tree near Gerritsflesch, Veluwe, Holland. This young specimen had a rather unusual growth on the pore surface. Not a 100% sure this is the right ID for this fungus, so suggestions are more than welcome. (sources: see reference)