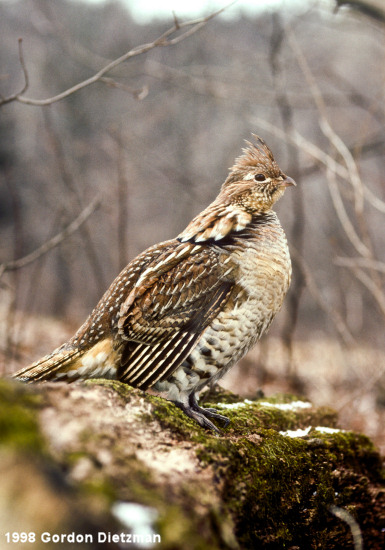 This chicken-sized bird comes in both a gray and red/brown phase. Both genders have neck ruffs and crests and are difficult to tell apart, unless they are in hand.

Forests, both deciduous, conifer, and mixed forests. rarely have I found them in the open.

Males often select high spots, such as logs or rocks to "drum." They drum by flapping their wings and trapping air between the wings and body. The sound of which has been likened to a motor trying to start. The drumming starts slowly then speeds up lasting for about 10 seconds or so. I've found that in spring a dominant male will drum about every four minutes when they are actively drumming. Drumming in spring is to establish territory and attract females. In fall, drumming serves to drive young males of the year out of the dominant male's territory when they are smaller. As a result, the dominant male is less likely to have to contend with them the following spring when they are larger. The young birds, especially the males, tend to use this time to disperse to areas of lower population density to establish their own territories. These movements are sometimes termed "crazy flights" as the young males end up in some very strange places, such as open suburban yards. Drumming is low frequency; my wife, for instance, can't hear the drumming unless the bird is very close by, although I can hear them easily. Interestingly, owls don't hear in these frequencies well either and some researchers believe that fact is not coincidental as the grouse typically drum at dawn and dusk. Drumming logs are often located within brushy areas with branches overhead, possibly again to help deter avian attack.