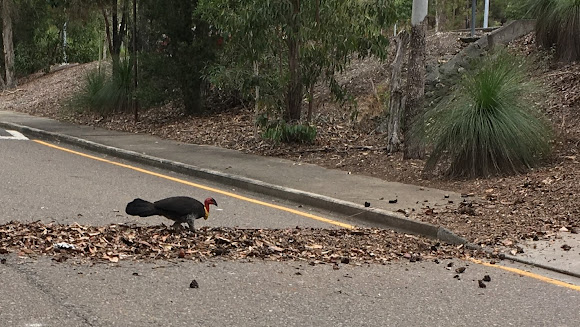 Birds behaving badly... again! The Australian brush turkey, aka scrub turkey or bush turkey, is a native species of megapode, or "mound builder", belonging to the family Megapodiidae. A friend sent me these photos whilst driving around the uni campus yesterday and today, and they were just too good not to share. I love this stuff and it makes me smile. This is a male, and he is moving all of the mulch, bark and leaf litter from the garden, across the road, to build his nest on the other side. Why he doesn't just build it in the garden is anyone's guess! Photos 3 and 4 are from this morning, and it appears that he has succeeded. Behold the mound, but I doubt he's finished yet. No amount of vehicles, cyclists, pedestrians, or rocks falling from outer space, were going to deter him from completing his task! This is a stubborn and tenacious bird, and it's hilarious to watch provided it's not digging up your backyard. I've seen them do it, but they are protected by law so you can't touch them! There's plenty of info about the species at the references. Here's a spotting I made last year as well, where the turkey made his mound in a hospital car park. This provided days of entertainment for hospital staff. A trap was even set.... https://www.projectnoah.org/spottings/12...

Bushland area on the campus of Griffith University at Nathan, Brisbane.

It is illegal in this country to interfere with wildlife, and that includes their nests, unless you have a specific license or permit. The Queensland Government's Department of Environment and Science issues "damage mitigation permits" (DMPs) to bird relocators who can capture and relocate male brush turkeys in circumstances where it can be shown that the presence of the mound is a threat to human health and wellbeing or is causing financial loss. Unfortunately, to move one male out only leaves a vacancy for another to move in.