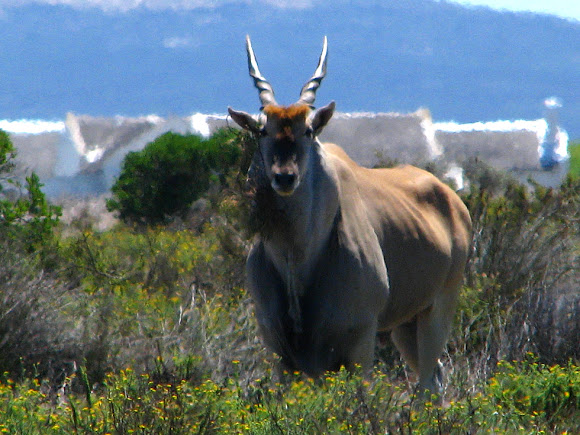 The elands are spiral-horned antelopes belonging to the Bovid tribe of Tragelaphini. Females weigh 300–600 kg (660–1,300 lb), measure 200–280 cm (79–110 in) from the snout to the base of the tail and stand 125–153 cm (49–60 in) at the shoulder.[7] Bulls weigh 400–900 kg (880–2,000 lb), are 240–345 cm (94–136 in) from the snout to the base of the tail and stand 150–183 cm (59–72 in) at the shoulder. Coats are generally smooth at most of the body with a rough mane. Females have a tan coat, while males have a darker tan coat with a blueish-grey tinge; there may also be a series of white stripes vertically on the sides of bulls (mainly in parts of the Karoo in South Africa). But as males age they tend to turn a grayer color. Males have dense fur on their foreheads and a large dewlap. Both sexes have horns, about 65 cm (26 in) long and with a steady spiral ridge (resembling that of the bushbuck). The horns of males are shorter (17–26 in) and thicker than the females (20–27 in), which are more pointed. The female's horns are wider set and thinner than the male's. The eland has a mass of about 650 kilograms, which is the double of the kudu. They have a hump at the shoulder and a broad fold of skin hanging from the neck. Elands are said to be one of the slowest antelopes and can even jump over a height of 2.5 meters or above. Elands have an average lifespan of 15–20 years, and some have been known to live for as long as 25 years . When walking, tendon or joints in the eland's foreleg produce a sharp clicking sound, the cause of which has not been widely investigated. The sound carries some distance and is a good indication of an approaching herd. Scientists take it as a form of communication in elands. There is evidence to suggest that the clicking is an indication of size and fitness, being linked to the density and length of the tendons which may help indicate which males are the strongest and avoid unnecessary fighting over the females.

Savanah and grasslands of Southern Africa from Ethiopia to South Africa

Look at those spiral horns!