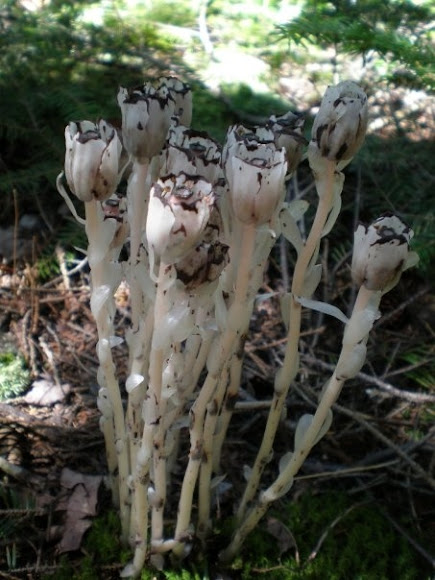 Indian Pipe, also known as “Corpse Plant,” is one of the easiest plants to recognize. Unlike most plants, Indian Pipe doesn’t have chlorophyll, the stuff that makes plants green. Indian Pipe is a waxy, whitish color. It turns black when it gets old. Indian Pipe grows only four to ten inches tall. It has flowers that droop and tiny, scale-like leaves. When they look at it, most people think Indian Pipe is a fungus. Indian Pipe is usually seen from June to September. It grows in shady woods with rich soil and decaying plant matter. This plant is often found near dead stumps

And I have one in Oregon :)

Thank you Birdlady..
I'll look you up..
Nick

We have Indian Pipe here in BC too! Isn't it interesting? I tried to call it a fungus too but was amazed to find that it was not. I have a spotting of it on my Noah also!

Sorry.. Thanks for the help.

Hey Nicholas, you've tagged this spotting as a mushroom and added it to the mushroom mapping mission, but Indian pipe is actually a plant. It's non-photosynthetic, rather it's myco-heterotropic: it's parasitic on fungi, which in turn obtain their nutrients from trees.