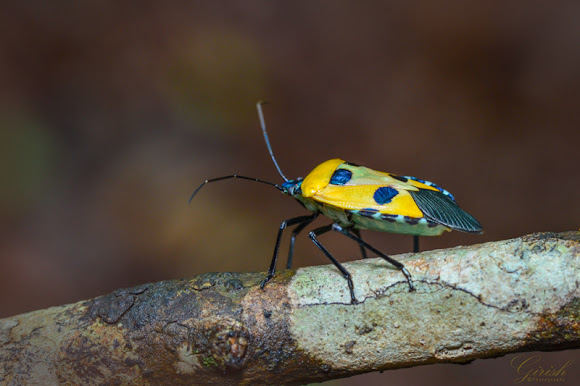 This is Catacanthus incarnatus, otherwise known as the Man-Faced Stink Bug. Discovered in 1778 by British entomologist, Dru Drury, the species hails from Southeast Asia and India, where it congregates in dense groups of several hundred on fruit trees and flowering flame trees. Man-Faced Stink Bugs can come in several colours, such as red, yellow, orange and cream, and it's thought that these mostly bold colours exist to warn predators that the bug is either poisonous or at least tastes horrible. The bizarre face pattern could also function as a defence mechanism, with the pseudo-eyespots drawing attention away from the vulnerable head area. Also known as shield bugs, Man-Faced Stink Bugs have a thick, hardened extension of the thorax, called a scutellum, that covers and protects the top of its abdomen. It sometimes has two prominent black dots on its scutellum, but always has a pair of big, black spots on its leathery wings. (Source: https://blogs.scientificamerican.com/run...)

Hi girishanagha,
Welcome to PN...if it is your own spotting you do not need to fill the Suggest an ID box...that is for others to suggest a name when you do not know the name of the species you have spotted and uploaded. Cheers.