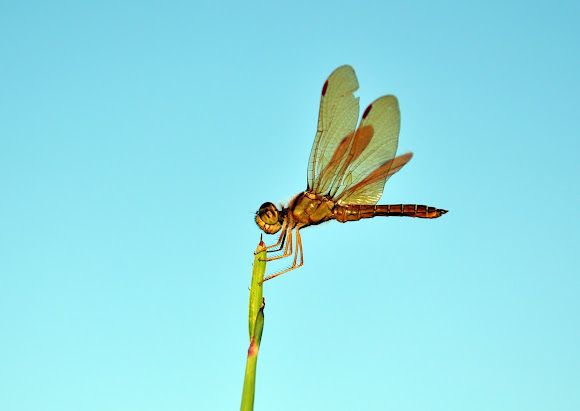 Voracious predator in its environment, the dragonfly can eat 14% of its weight feeding only on other flying insects __ bees, flies, beetles, wasps, dragonflies other minors, and even the mosquitoes Aedes aegypti mosquito, which transmits dengue in __ a single day of her short life out of water. Living just one to two months with their wings, after spending five years in the aquatic environment, she has little time to find partners and procreate before a predator to find first. Recent research has shown that a small beetle carries about 150 daily flights, achieving a success rate of 43% in hunting and eating 11% of their weight. Already a dragonfly, with little time to "brevet", held twice more flights and is successful in 51% of their investigations. While living in water, the dragonfly has to run away from frogs, fish and birds. With wings, it has other enemies: spiders, praying mantis and other birds.

Anyone who has doubts about the quality of water from a river or lake can make the "test of the dragonfly, which is the simple observation that there are dragonflies in the area. Every river or lake with clean water has dragonfly. However, the slightest change physical chemistry of water or air will be good enough to expel them, and prevent new larvae leave the egg. Thus, the presence of the insect serves as an excellent bioindicator of environmental quality. The greatest threat to the lives of dragonflies is environmental pollution. In water pollution causes drastic changes in their physical characteristics, such as suspended sediment, and chemical, such as changes in pH, conductivity and dissolved oxygen in water. In air, similar processes occur, including climate change.

Two to three weeks after we put the eggs, larvae of dragonflies emerge. Then begins a long cycle of aquatic life, which in some species, can last up to five years. In his submerged existence, the larvae feed on microcrustaceans, young fish and other larvae __ she acts as the culmination of a major food chain of aquatic environments of lakes and rivers __ and pass through up to 15 successive metamorphosis to turn into a naiad, that already resembles the adult insect but moves into water through jets of water coming out through the rectum as a siphon. At one point, called a view of the biological clock, whose mechanism remains unexplained, the naiad makes the transition from aquatic to land where he will make his final metamorphosis. The escalation of the springboard for the new world is usually done at night to escape predators. Climbing up the stem of any plant, the larva stops feeding and remains motionless for several hours preparing for change. The dragonfly breaks his final exoskeleton at the back, releasing the head and thorax first and then the abdomen (the process takes 30 to 40 minutes). His wings, wet, need two to three hours to solidify in contact with air, when the dragonfly is then rigged and ready for takeoff.