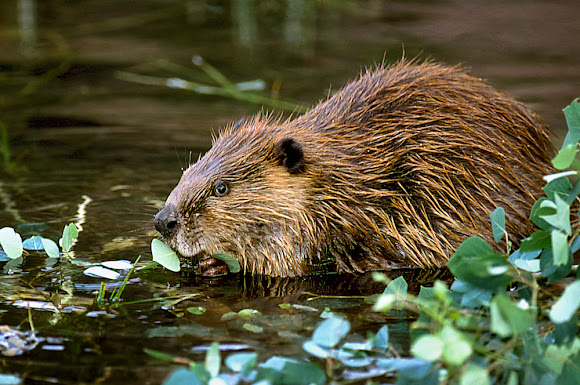 The beaver is the largest (up to 77 pounds) rodent in North America. It's fur is brown and has a thick undercoat and longer guard coat. Rear feet are webbed for swimming and the tail is flattened to a paddle-shape.Ears are small and rounded.

Was once found throughout much of North America, especially the United States and Canada. Well known for its dam and lodge building along streams, it is also fairly common in large rivers and lakes where it rarely builds dams and lives in dug bank dens. Was largely extirpated from much of its range during the heyday of the fur trapping era. Within the last few decades, however, this animal has been expanding back into its former range and is becoming common once again. They feed on bark, often felling even large trees, especially aspens for food as well as dam and lodge building.

I photographed this beaver in Colorado in the Maroon Bells-Snowmass area, but find them in small streams throughout the US Midwest and even in the Mississippi River in downtown St. Paul, Minnesota!

Gordon, all reintroduced animals are European (Castor fiber). The first ones were from the Rhone valley in France (Castor fiber galliae), followed by Norwegian animals ( Castor fiber fiber) and Russian animals (Castor fiber vistulanus).
More details in http://www.beaverwatch.ch/pdf/1.1.2%20pr...
Hope Google Translate will help you there too!

Great photo, and I especially enjoy and appreciate your thoroughness in your description/habitat/notes fields. Contributions like this make Project Noah much more of an educational tool rather than just a photo sharing site. Keep up the good work!

Daniele, Thanks very much for the link. I read some of the articles, but I'm afraid I'm not as versed in the languages as what I should be. I'm curious. Do you know where they got the individuals for reintroduction purposes?

Great notes and picture Gordon. Here in Switzerland after having totally disappeared beavers have been reintroduced and are getting quite a bit of following.
http://www.beaverwatch.ch/