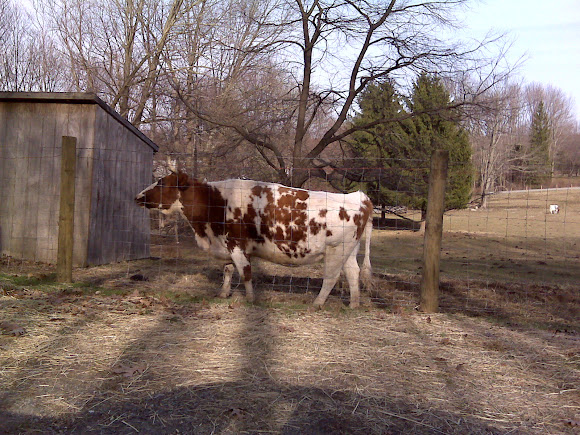 The Ayrshire is a dairy breed named for its home region, County Ayr in southwestern Scotland. Unlike many other breeds which trace their ­origins to landrace populations, the Ayrshire was purposefully developed as a standardized breed. Breed development began in the mid‑1700s, when native black and black and white cattle were crossed with Flemish and Teeswater cattle and with cattle from the Channel Islands. The goal was to ­increase milk and meat production. The breed was recognized in 1814, and selection during the 1800s further improved dairy qualities, with emphasis on milk for the manufacture of cheese and butter. A herdbook was established in 1877. Ayrshires were first imported to North America in the 1830s, but the majority of ­imports came after 1850 and thus reflected more ­improved types. The breed became especially popular in New England, and Daniel Webster was among its early proponents. Ayrshires also became widespread in eastern Canada. The American ­Ayrshire Breeders Association was formed in 1895, and the breed’s numbers grew dramatically after 1900. Ayrshires have alert and active dispositions, and the breed is considered the most stylish of the dairy cattle. Its handsome, lyre‑shaped horns are distinctive. Cattle are white with dark red or reddish brown spots and ­speckles. Some cattle have brown legs, as if they have their work boots on. Ayrshires are medium in size; cows average 1,100 pounds and ­bulls 1,600 pounds. In spite of their bovine beauty, Ayrshires are best known as hardy, useful cattle, well adapted to cold climates and rugged environments. The cows are excellent grazers, able to maintain condition, reproduce efficiently, and produce up to 20,000 pounds of milk per year, primarily on a forage diet. The cows’ longevity adds to their value. Over the last 30 years, the number of registered Ayrshires in North America has declined significantly. The breed cannot compete with the Holstein in milk quantity produced under confinement conditions. On the other hand, the Ayrshire thrives under low‑input, grass‑based dairying, and the growth of this production niche has increased interest in the breed. Ayrshire numbers are relatively stable and numerous globally, though the declining status of the North American population has attracted conservation efforts.