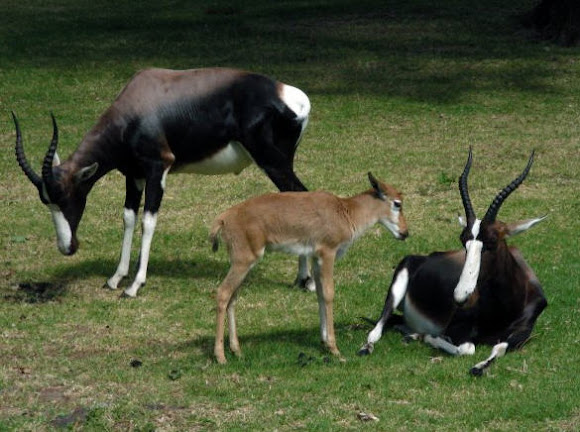 From the IUCN Red List of Threatened Species: The Bontebok was historically confined to the coastal plain (60-200 m) of the Western Cape, South Africa, where overhunting reduced it from locally abundant to the verge of extinction. It was saved from extinction in the mid-19th century by a few Cape farming families who protected the small remnant populations. From a low of less than 20 animals in the original Bontebok National Park (established near Bredasdorp in 1931), the population of this antelope has gradually recovered.

From the IUCN Red List of Threatened Species: Almost exclusively grazers, with a preference for short grass; water is an essential habitat requirement.

This small group was photographed at the Helderberg Nature Reserve, which is located on the slopes of the Helderberg mountain near Cape Town, South Africa.

"Bontebok were once considered to be the rarest antelope in the world, careful conservation has ensured their survival."