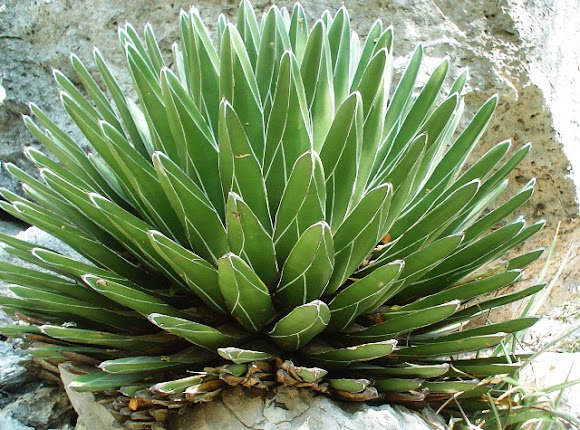 Agave victoriae-reginae, is a small succulent plant species belonging to the family of agaves. Known in the Laguna Region of Coahuila and Durango as Noa. This plant has varying forms, but in general the rosettes are small and compact, composed of leaves short, hard, stiff and heavy, measuring 15 to 20 cm long and 4-6 cm wide, distinctive signals in white margins. The marks are usually found along the road next to the margins, giving the appearance of multi-faceted image. The margins are not serrated, but at the end of the sheet may include from 1 to 3 spines each 1-3 cm longitud.Tiene a height of 30 cm, when has not called quiote inflorescence, which is a central rod branched at the peak flowering to mature fruits and seeds dándo, it reaches to a height of just over one meter this happening only once in his life between the months of June through August, then the plant dying.

It is remarkable for its sculptural and geometric leaves so they are very popular as an ornamental. It was named in honor of Queen Victoria of England. Considered endangered by illegal marketing of its high (Collectables mainly) abroad were quoted a small plant up to 15 USD and one as the photo up in 1000 to 2000 USD