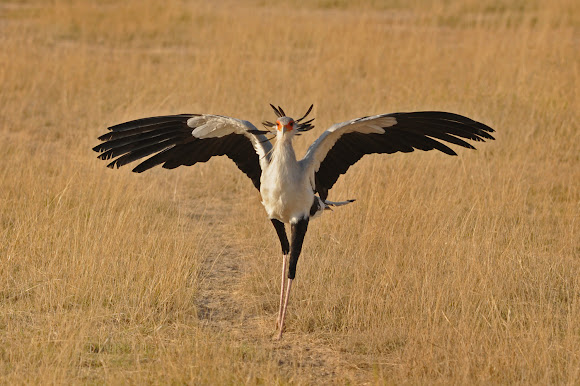 Huge bird "taller" than 1 metre. Although it is called secretary, it is not gentle at all! from "serpentarius", you could know it mainly feeds on snakes, & sometimes mice, lizards, bird eggs, etc. Instead of pecking around, it stamps on the prey to stop its motion and pick it up & drop on the ground hard. What a violent bird @@

Fun fact! Secretary birds have a unique method of dispatching their prey: These large birds of sub-Saharan Africa hunt snakes, literally stomping them to death!

Congrats on your SOTD award.

Fantastic picture and congrats with Spotting of the Day!

Congrats Ning! This stunning shot has been selected as Spotting of the Day!

"The Secretary Bird is instantly recognizable as having an eagle-like body on crane-like legs which increases the bird’s height to as much as 1.3 m (4 ft) tall!"

so nice posture! my compliments!

What a lovely crest! It must be great to watch when the wind blows!

Haha Ning, I totally loved your description. And what a beautiful bird.