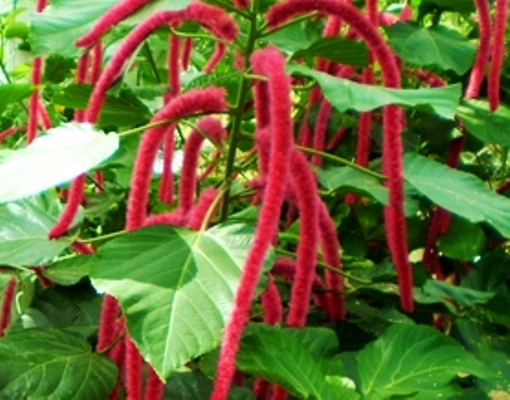 The plant is dioecious, and therefore there are distinct male and female members of the species. The female plant bears pistillate flowers which range in color from purple to bright red, and grow in clusters along catkins. This feature is the primary reason the plant bears the nickname “red-hot cat tail”. The pistillates will grow all year long as long as the temperatures are favorable.

The plant originated in Oceania, but has become naturalized to multiple countries in North America, including the United States, Mexico, and Belize. It can grow to be six to twelve feet (1.8-3.7 meters) tall, and have a spread of three to six feet (0.9-1.8 meters). The plant has become somewhat domesticated, due to the nature and color of its flowers. It can be grown from seeds as well as from cuttings. It can be kept either as an outdoor plant or as a houseplant. However, care should be taken in growing it, as all parts of the plant are poisonous if ingested by animals.

Dear Yulia, same as KarenL just said. Is better if you crop the image to focus it on the organism, at least for the front picture of the spotting.

Hi Yulia, this is a lovely photo but we request no humans here so please can you crop the image. Thanks!

Thanks, I actually so enjoy doing this...could never imagine))))