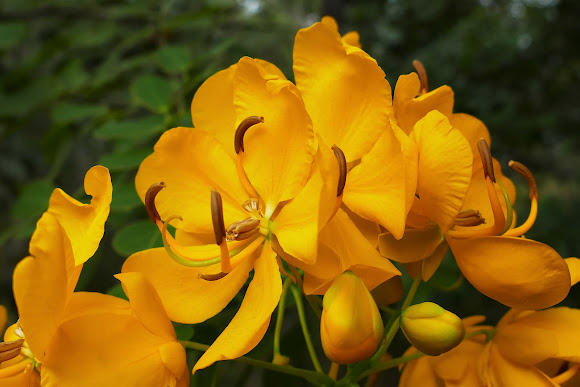 Senna pendula, also known as Easter cassia, climbing cassia, winter senna and valamuerto, is a member of the Fabaceae family and native to South America. This is an erect, spreading or sprawling shrub usually growing between 2-4 metres tall, but occasionally reaching up to 5 metres. The flowers are yellow or greenish yellow and the name pendula means 'pendulous' or 'drooping'. This species is regarded as a significant environmental weed in NSW and Queensland.

A weed of waterways, gardens, disturbed sites, waste areas, roadsides, closed forests, forest margins and urban bushland in tropical, sub-tropical and warmer temperate regions. This spotting was in native bushland along the Araucaria Track, at Enoggera Reservoir in Brisbane.

The S. p. glabrata variety has become naturalised, and is also an environmental weed, in eastern Australia in the coastal and sub-coastal regions of south-eastern Queensland and New South Wales, where it is found in watercourses, gardens, disturbed sites, wastelands, roadsides, closed forests, forest margins and urban bushland. It is spread by seed, suckers and dumped garden waste. Despite it being invasive, it is not a prohibited or restricted invasive plant under the Biosecurity Act 2015. (Wikipedia)