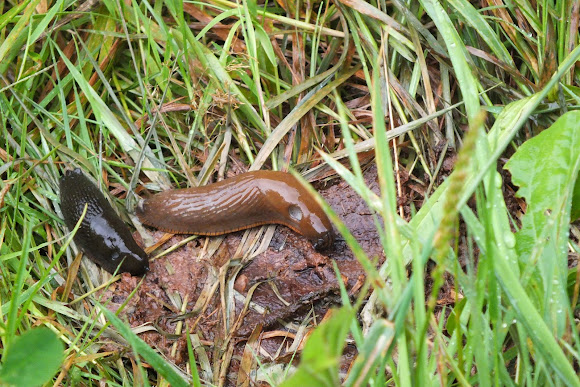 The size of the Black slug varies from 10 to 15 cm. Maturity is reached at about 2.5 cm. The color of the Black slug is generally deep black, but the colouration is very variable and this slug can even be white. The general trend is for a darker pigmentation the farther north the species is found. Young specimens of Black slug do have a brown colour, which is later lost if and when the slug changes color to the mature state. The foot-fringe is black. The tubercles large and elongate. The sole is blackish grey. Juveniles are ivory whitish with black head, but soon become greyish, half-grown animals are often black like adults. Arion rufus is distinguished from similar species by the position of its respiratory pore toward the front of its mantle, the lack of a keel on its back, and a wrinkled surface. It varies in color from orange or red to brown or black. The fringe of its foot is red-striped and its tentacles are dark. It is 7 to 14 centimeters long. Its mucus is sticky. The eggs are about half a centimeter long and are whitish when new, turning yellow-brown.

Both species are known from wooded areas and dry coastal habitat, and are commonly found in gardens.