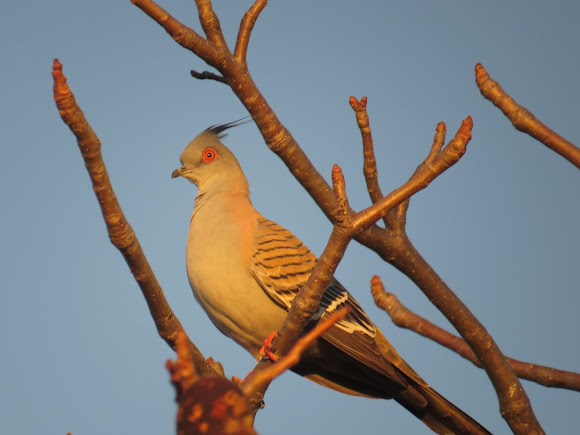 The length of the Crested Pigeon varies from 30 to 34 centimetres . Colouration is grey with tinges of brown and green. It has a feathered but slender, black spike on top of the head. They run with the crest erect. The periorbital skin is bright orange. Wings have black stripes and are bronzed, while the primary feathers have colourful areas of brown, purple, blue and green. Immature birds have duller colours with no bronzing on the wings.

The Crested Pigeon is sometimes incorrectly referred to as a Topknot Pigeon, however the Topknot Pigeon, or Lopholaimus antarcticus is a different species altogether, and has a red-brown crest that does not stand erect.

Thanks Mark and Armadeus (fellow Derby resident) for the correction.

Lovely shot and light Barbara... not so lovely common name. :-)