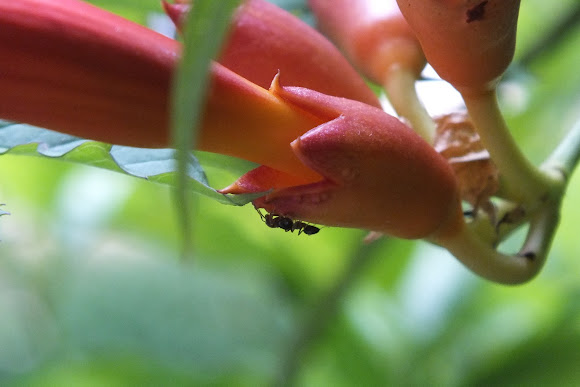 The Black garden ant, also known as the Common black ant, is a formicine ant, the type species of the subgenus Lasius. It is monogynous, meaning colonies have a single queen. Lasius niger colonies can reach in size up to around 40,000 workers but 4,000–7,000 is around average. A Lasius niger queen can live up to around 15 years. The queen is also be a glossy black colour but appears to have slight brown stripes on her abdomen. The queen can reach 6-9mm in length and is smaller as a new queen. When a queen is fertilised she removes her wings and digests her wing muscles as food over the winter. Lasius niger workers are dark glossy black and are around 3-5mm long. As the colony gets older it has been known for workers to increase in size over generations. Drones are only produced by queens when the nuptial flights are approaching. They appear with a dark glossy body with a different shape from the workers, almost resembling a wasp appearance. They have wing muscles which stand out from the rest of the body. They are 5-7mm long and have delicate wings.

Spotted on a Trumpet creeper (Campsis radicans) in urban area of Deventer, Holland.