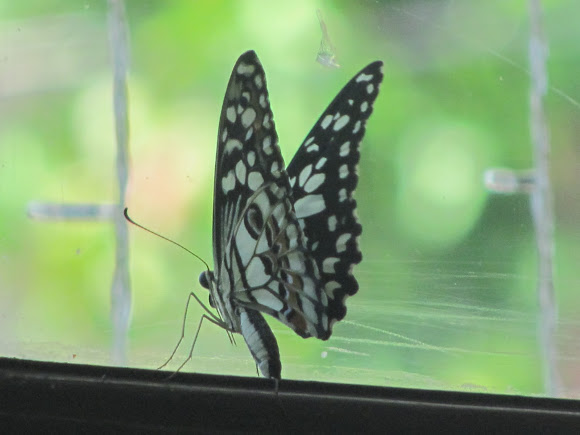 The Common Lime Butterfly is a populous swallowtail butterfly with extraordinary range, being found throughout the world, from Oceania to North Africa, the Americas, Southeast Asia, and the Middle East. Unusually for a swallowtail, the Common Lime does not have an obvious tail. The Common Lime is also very versatile in terms of habitat given that it can live in urban environments as well as agricultural areas and has even been found to be capable of inhabiting plains situated upwards of 7000 feet in the Himalayas. As the name would suggest, the diet of the Common Lime Butterfly does include lime (Citrus aurantifolia Rutaceae) although it is known to eat Pomelo (Citrus maxima) and Herb-of-Grace (Ruta graveolens Rutaceae).

There is a slight distortion of colour in the photograph, as the Common Lime Butterfly depicted was the typical pale yellow although it appears to be green.