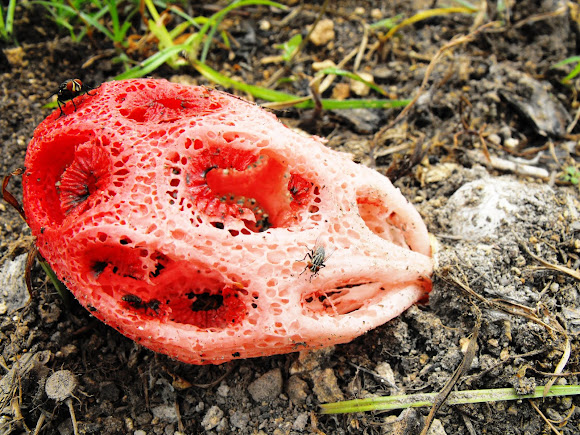 This is a red fungus that I used to see a lot when growing up. I had not seen it for years (may be as I was not at home frequently) but it used to grow in my yard. Then all of sudden, it was there, sprouting from the ground. It was great to see that it was still around, but have not seen it again since 2009. Not sure about its nature.

Soil (used to grow in areas where there were banana trees).

its starts as a white ball from the soil looking like a white egg then bursting the white coat as it expands exposing the red body that stinks and attracts flies. It usually living for a day or two (as I recall) drying up as fast as it sprouts.

Thanks for being so helpful with identifying all these fungi, Tim!

hey Tim! thank you a lot! now I now. I always googled it but but never had it right as I just used basic word descriptions and never took a book to help!!! i came across clathrus ruber on google images but let it pass at it seem a random different image but now it there ~ Muchas Gracias