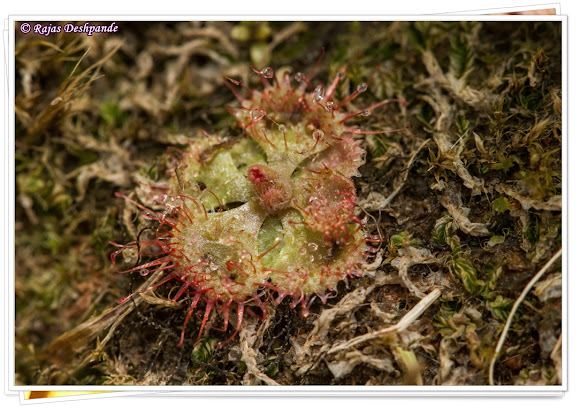 Burmann's Sundew is a small, compact insectivorous plant, normally spanning only 2 cm. It is probably named for N.L. Burmann, 18th century Dutch botanist. It is one of the fastest insect-trapping sundews, and its leaves can curl around an insect in only a few seconds, compared to the minutes or hours it takes other sundews to surround their prey. The leaves all lie flat on the ground in a rosette. The are 6-12 mm long, narrow at the base. The upper surface is covered with sticky glands which trap insects and digest them. Tiny flowers arise on a leafless scape, 5-20 cm long, arising from leaf axils. Burmann's Sundew produces large amounts of seed.

Great find Rajas! Thanks for sharing.