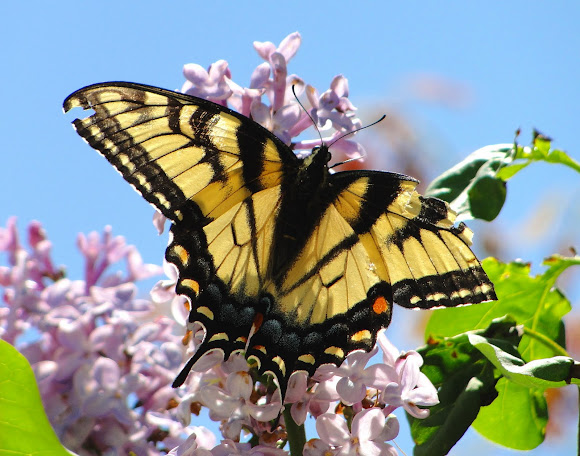 Male is yellow with dark tiger stripes. Female has 2 forms: one yellow like the male and the other black with shadows of dark stripes. Hindwing of both female forms has many iridescent blue scales and an orange marginal spot. On the underside of forewing of both female forms the row of marginal spots has merged into a continuous band. 3 5/8 - 6 1/2 inches. Caterpillar Hosts: Leaves of various plants including wild cherry (Prunus), sweetbay (Magnolia), basswood (Tilia), tulip tree (Liriodendron), birch (Betula), ash (Fraxinus), cottonwood (Populus), mountain ash (Sorbus), and willow (Salix).

This one had part of it's wing missing.

Hope to see more of them this year!

Is this male or female?