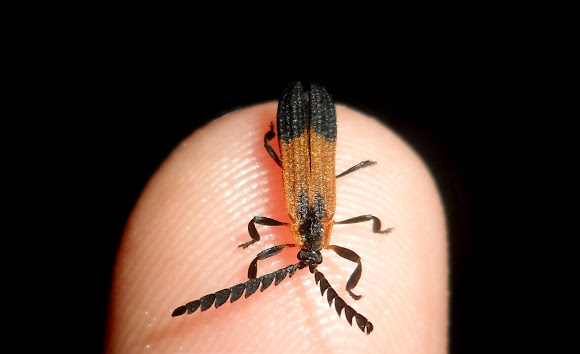 Small beetle, about 7mm, do not know what it was doing in my bathroom sink.

Lycidae is a family in the beetle order Coleoptera, members of which are commonly called net-winged beetles. Beetles of this family are elongated and usually found on flowers or stems. The adults of some species are nectarivores while some may have short-lived adult lives during which they may not feed at all. The head is triangular and the antennae are long, thick, and serrate. Most of them are brick-red in colour. They are protected from predators by being toxic. The predaceous larvae grow under bark or in leaf litter. Lycid beetles are toxic and offensive in taste to most predators, which they advertise by the orange and black colours. Many other insects mimic Lycid beetles.

Thanks. You have a copper bowl with water magic, and you can see the future by reading the lines of the hands of the people? What other secrets you hide? :P

Such an adorable picture :) Great sharpness too..I can see lines and marks on your hand..You make a great fortune :)