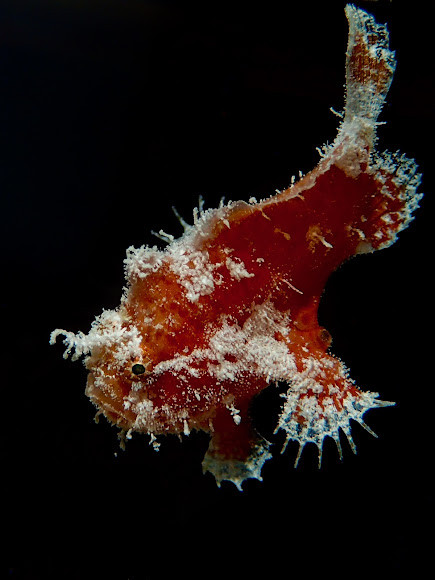 Indo-East-Pacific: Red Sea and East Africa to the easternmost islands of the Pacific Plate, including the Desventuradas Islands. Can be found in tide pools as well as lagoon and seaward reefs; secretive among rocks and sponges. Found among reef crevices or among rubble in 1-75 m, but usually less than 10 meters.

This Juvenile Scarlet Frogfish- Antennatus coccineus is around 1.5 cm in size. It was attracted by light at night behind our Boat, which attracted a lot of tiny planktons and this baby Frogfish came for a feast.

Thanks, @Michael Strydom :)
This one came looking for us, behind our Boat at night :D

Congrats on SOTD. looks like a tricky one to spot if on the reef. Well found !!

Amazing series Albert,super cool look,congrats on the well deserved SOTD and thanks for sharing

Thanks, @Daniele for this SOTD :)

Congratulations Albert, your Scarlet Frogfish is our Spotting of the Day:

"This rather extraordinary creature is a Scarlet Frogfish (Antennatus coccineus), and it is our Spotting of the Day! Frogfishes (family Antennariidae) are short and stocky fish often covered in small spines and other appendages. These constitute camouflage that not only helps frogfishes hide from predators, but can also help them to lure preys. Their first dorsal spine, which sits directly above their upturned mouth, is modified into what is effectively a fishing rod or luring apparatus (called 'illicium'), tipped with a lure or bait (called 'esca'). The lure often mimics a small animal. Here it appears as a white filamentous structure hanging right above the frogfish's mouth. Mimicking a potential meal to lure a prey is known as aggressive mimicry. This contrasts with defensive mimicry, where the prey acts as a mimic and the predator is duped".