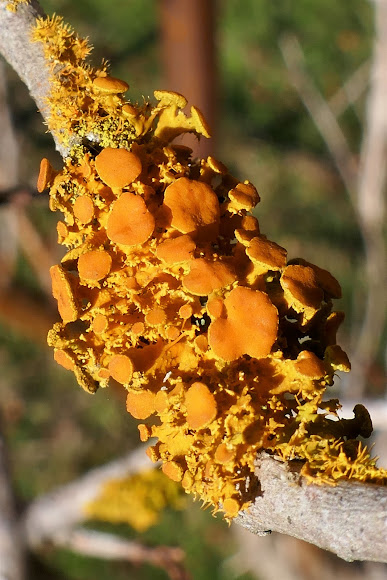 Orange-coloured lichen found growing on the branches of a cherry blossom tree. So far I've been unable to locate a common name for this species (other than Teloschistes Lichen), so "Orange Lichen" will suffice for now. I have selected Teloschistes sieberianus as the most likely species because it has been documented in Girraween National Park, only a stone's throw from here, and further north in Stanthorpe and Toowoomba. The Teloschistaceae are a family of mostly lichen-forming fungi belonging to the class Lecanoromycetes in the division Ascomycota. And it's not only the colour that is striking about this species. It also has very pronounced spore-bearing structures known as apothecium, or (plural) apothecia, found on many lichens and fungi, consisting of a discoid or cupped body bearing asci on the exposed flat or concave surface.

On the branches of a cherry blossom tree. This is a quiet area of native bushland, mixed agricultural farmland, particularly grapes for wine production. Located on the Granite Belt near Girraween National Park and the township of Ballandean. This species seems to cope with a climate of hot summers, potentially very cold winters, and prolonged dry periods. I have only ever seen it growing on trees, and never on rocks like other species of orange lichen.

A handy list of fungi/lichens found in nearby Girraween National Park - http://www.rymich.com/girraween/download...