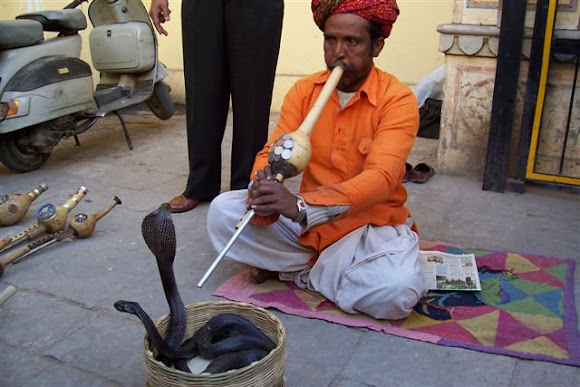 Snake charming is the practice of pretending to hypnotise a snake by playing an instrument. A typical performance may also include handling the snakes or performing other seemingly dangerous acts, as well as other street performance staples, like juggling and sleight of hand. The practice is most common in India, though other Asian nations such as Pakistan, Bangladesh, Sri Lanka, Thailand, and Malaysia are also home to performers, as are the North African countries of Egypt, Morocco and Tunisia. Snake charmers typically walk the streets holding their serpents in baskets or pots hanging from a bamboo pole slung over the shoulder. Charmers cover these containers with cloths between performances. Dress in India, Pakistan and neighbouring countries is generally the same: long hair, a white turban, earrings, and necklaces of shells or beads. Once the performer finds a satisfactory location to set up, he sets his pots and baskets about him (often with the help of a team of assistants who may be his apprentices) and sits cross-legged on the ground in front of a closed pot or basket. He removes the lid, then begins playing a flute-like instrument made from a gourd, known as a been or pungi. As if drawn by the tune, a snake eventually emerges from the container; if a cobra, it may even extend its hood. Snakes ANIMAL rights group PETA has called on India's snake charmers to use fake reptiles during an upcoming serpent festival and spare the animals their annual torture. The Indian unit of US-based People for the Ethical Treatment of Animals (PETA) said snakes were abused during the annual Naag Panchami festival, which is celebrated in honour of a Hindu serpent god and is scheduled for August 30-31. PETA claimed snakes were cruelly captured in suffocating bags, kept in tiny boxes, starved or forced to drink milk. Their teeth are often violently torn out, and many snakes' mouths are sewn shut, it added. "There is no place in a civilised society for yanking snakes' teeth out and sewing their mouths shut," PETA India campaign coordinator Chani Singh said in a press statement. "PETA India is calling on snake charmers to rein in this egregious abuse by using fake snakes for God's sake," Mr Singh added, saying that realistic plastic or rubber snakes could be used instead. The most influential people in Sport PETA's statement was swiftly condemned by the Bedia Federation of India, a non-profit agency which represents the nomadic snake charmer community. "How can PETA accuse us of torturing and abusing snakes? We worship snakes, we would never want them to suffer and die," Raktim Das, the general secretary of the federation, told AFP. Mr Das said the call by PETA was nothing short of a publicity stunt aimed at making life more difficult for their 800,000-strong community which had been "living a life of penury" in the wake of strict wildlife laws. "Our livelihood has been snatched from us. There is no alternative employment opportunity for us. Where do we go and what do we do to earn a living?" Mr Das said. The snake charmers have long been a favourite with tourists in India but the practice was proscribed under wildlife legislation implemented in 2002. The Naag Panchami festival goes ahead regardless, with devotees worshipping snake pictures, idols or in some cases live serpents. A small number of charmers can still be spotted around major tourist sites in places like New Delhi, risking arrest as they cajole foreign visitors into taking a snapshot for a small fee.

The wikipedia has the same snake charmer in its picture!
http://en.wikipedia.org/wiki/Snake_charm...
For a minute I thought it was my spotting.Looking carefully ,the snake charmer and snake are both looking in different directions!

I am glad people are finding alternatives!

I totally agree with ctsetan, keep it up bro!

GOOD PIC of a SAD SITUATION.
Most (and i say most) of the snakes kept by these snake charmers are defanged (which doesn't make sense since snakes can regrow its fangs), so they have their venom glands burnt with putting hot iron rods inside their mouth. And as Ashish has rightly said, sometimes their entire mouth is sewn.
The snakes usually die either of starvation or else due to physiological disorder within short period after its capture.
I have even witnessed some charmers making the snake fight with mongoose. In the end, the loser is always the snake who gets bitten and seriously mauled by reluctant but defensive mongoose (since the snakes are thrown upon the mongoose who doesn't want to go and bite the snake on its own). I the sight was too horrible for me to take pics.
Lets hope that with the ban of such street shows, less snakes face such fate. Amen.

Thanks for this great info Kalpak. Really intriguing!

The Cobra is considered to be a holy snake in India. You can find it around the neck of Lord Shiva(the lord of mercy and compassion). Sages have used 'nag'(cobras) to symbolize the yogic power of Lord Shiva with which he dissolves and recreates the universe. Like a yogi, a snake hoards nothing, carries nothing, builds nothing, lives on air alone for a long time, and lives in mountains and forests. The venom of a snake, therefore, symbolizes the yogic power.

Snake charmers in India treat snakes with utmost care and are devotees of lord Shiva. It is considered taboo to kill a snake(although it does happen a lot) here.

The practice of taming snakes captive has reduced drastically now-a-days. But there certainly is a conflict between what it symbolizes(yogic power) and what it is showcased for(money)

Thanks for all the information! And you are right the world is full of blind faith and myths.. Not just India!

It will continue till blind faith in old foolish myths lasts...!!

Ashish , it does create a feeling of hopelessness and helplessness when you see atrocities like this and cannot do much.

But its not snake related festival. Naag is adopted from Naja means Cobra. Only considering praying Cobra god.

Yes... But it is very harmful to these poor replies(compared to Human)
The Cobra possessors try to feed milk to snakes, with blind faith from ancient myths. Poor and fool people to follow them without knowledge and pay them money for get blessing.

Cobra run.. Ngūh̄èā thảngān was my first word I learnt in a bazaar in Thailand.. Everyone screamed this 2 words.. I never got to see the snake, but I learnt the words..

Hahahaha..they are poor and trying to make money from you...

On a project in New Delhi - lived near the botanical gardens - used to go to Kahn market for supplies - my wife was always followed by the man and his cobra basket - she was always petrified.

Its so sad to see Cobra with closed mouth... Actually their mouths are sewed...!!

Hahaha..Nice work...
Naagpanchami is about to arrive in next week, so this will be common scene across India on August 4th, 2011.
I feel its following
http://en.wikipedia.org/wiki/Naja_siamen...

I heard that too. I hope the snakes are not too bored in that little basket.
"Swamp brothers " has an interesting episode on Cobras.

Emma, I also saw snake charmers in Varanasi. I was able to hold the cobra as well, even though I was a little reluctant. It seemed safe enough. I did hear though that the snake owners actually remove the fangs so they can't deliver any fatal bites.

Though as far as i know these snakes are well taken care of by their owners.

This picture is 5 years old.
These snake charmers were asked to stop this practice. It infuritaed them so much that they released hundred's of cobra's on to the streets of Delhi. Delhiteswere terrified!!
Change is happening but slow.
Easier said then done!