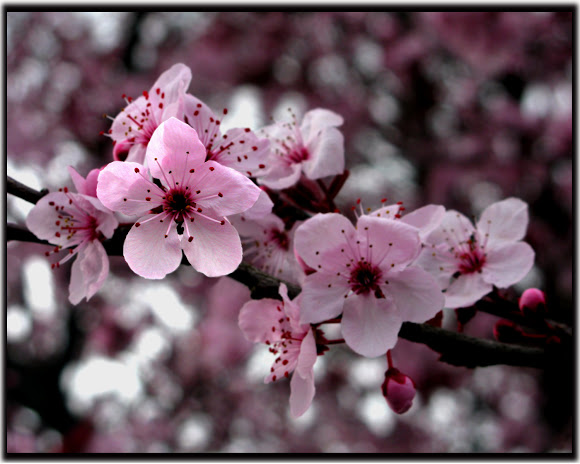 Cherry plum is a popular ornamental tree for garden and landscaping use, grown for its very early flowering. Numerous cultivars have been developed, many of them selected for purple foliage, such as 'Atropurpurea'. These purple-foliage forms (often called purple-leaf plum), also have dark purple fruit, which make an attractive, intensely coloured jam. They can have white or pink flowers. The cultivar 'Thundercloud' has bright red foliage which darkens purple. Others, such as 'Lindsayae', have green foliage. Some kinds of purple-leaf plums are used for bonsai and other forms of living sculpture.

This species can be found growing wild where it has escaped cultivation and become naturalized, such as in North America.

Cultivated cherry plums can have fruits, foliage, and flowers in any of several colors. Some varieties have sweet fruits that can be eaten fresh, while others are sour and better for making jam.

Really nice! I think those are flowers of Prunus or flowering cherry
http://images.google.com/search?hl=en&am...