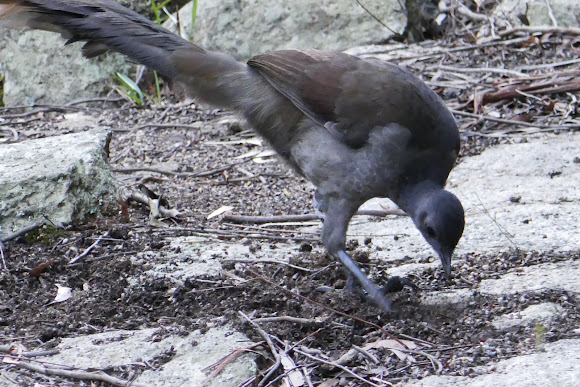 What I though was going to be a scrub turkey was, in fact, a female lyrebird. I could hear something crunching through the dry undergrowth, and then she popped out from behind some boulders and began scratching at the dirt on the track. I watched her for about 5 minutes, and I even made a really bad video. I must learn to wear my glasses when operating my camera :-/ https://youtu.be/kkJxpAIyryI This species, commonly known as the "superb lyrebird", is an Australian native songbird and one of two species from the family Menuridae. Roughly pheasant-sized, it's a terrestrial passerine and is one of the world's largest songbirds. Wild lyrebirds are shy and difficult to approach, and this girl was no different - she kept a respectable distance from me. My first ever "wild" spotting was of a male bird in June, 2017 - https://www.projectnoah.org/spottings/13... Conservation status: Near Threatened (NT) PS: Trivia: The superb lyrebird is featured on the reverse side of the Australian 10 cent coin (last photo), and is also on the NSW National Parks and Wildlife Service emblem.

Spotted amongst the boulders and dense foliage at the top of Mt. Norman, in Girraween National Park, southeast Queensland. http://www.rymich.com/girraween/

Listen to their mimicry - this BBC Earth video gets really interesting around 1:10 minutes - https://www.youtube.com/watch?v=VjE0Kdfo... And in this second video from around 2:50 minutes, I can identify at least a dozen native birds species mimicked, and the lyrebird obviously loves this fellow because it seems to be wooing him - https://www.youtube.com/watch?v=wky_xsmR... A lyrebird's song is one of the more distinctive aspects of its behavioural biology. They sing throughout the year, but the peak of the breeding season, from June to August, is when they sing with the most intensity. The song of the superb lyrebird is a mixture of elements of its own song and any number of other mimicked songs and noises.

It's only my second encounter with a wild bird, and it was wonderful. A happy memory that I'm not likely to forget anytime soon.

Shy birds make the best spottings. This spotting makes for a wonderful memory.

Thanks, Sukanya. It was a great surprise for me, and my only regret is that I didn't have a camera with a longer lens. I lose clarity in the shade. And the coin was an afterthought, but the number of people that have raved about seeing their first Australian coin... well, I'm sure there are a few here that haven't. Wait till I see a platypus, cos our 20 cent coin is cool :)

What a lovely surprise for you to see this shy bird...and great notes (as always.) The coin is a nice addition to the spotting.