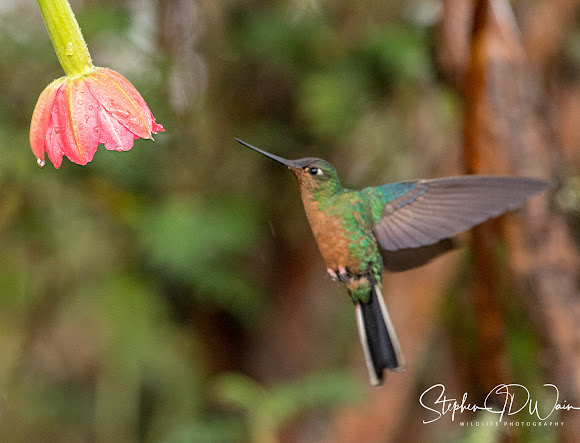 Buff-winged Starfrontlet is mostly green and are appropriately named as they have a conspicuous buff-colored patch on their wings. The male has an iridescent green forehead and violet gorget. The female has a buff throat. Both sexes have buff patches on the wings (secondary flight feathers). The tail is notched. The bill is black and straight. The buff patches on the wings at all age stages and sexes are unique among hummingbirds in this species’ range.

Buff-winged Starfrontlets inhabit dense cloud forests, elfin forests, and nearby shrubby areas. They are most often seen foraging low around forest borders where they primarily feed on nectar by hovering or briefly clinging to flowers. As the natural habitat is subtropical or tropical moist montane forest - which is found in Colombia, Ecuador, and Peru

Photos #1-4 are the female with #5-6 being the male. These hummingbirds are rather territorial and often pursue other hummingbirds in high chases, or guard flowers from others from a nearby perch.