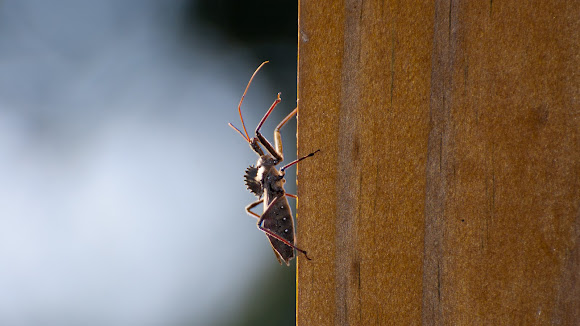 About an inch to an inch and a half long, easily identified by the cog or gear-shaped armored crest on its thorax. Usually brown, it's one of the largest true bugs in North America. Its proboscis extends is tucked in, but extends forward to stab its prey, inject enzymes, and suck the au jus from the victim. The young do not have the characteristic wheel, and have a bright orange or red abdomen that's almost vertical.

Eastern US is common ground for the Wheelbug, also known as an assassin bug. These photos were taken in woodlands in the Smoky Mountains of Tennessee.

The nymph photo was shot as it crawled across my deck ceiling. Since the abdomen is virtually black, it must have gone through a few of its five molts. Wheelbugs are cannibalistic, and after mating the female is known to kill and eat the male. They also have a scent gland, but it's not as potent as a stink bug smell. There's good reading on the Wikipedia site.