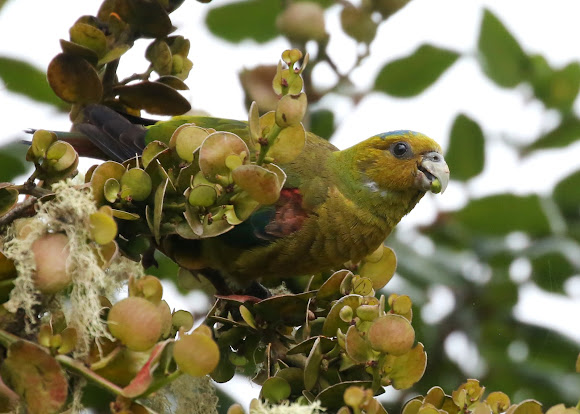 Also known as the Indigo-winged Parrot. This is a critically endangered endemic species to Colombia. Length is 24cm, essentially dull green, face and fore-crown yellow green, rear crown blue. Breast a yellow/olive, wings various shades of green with red shoulder and blue secondary coverts and dark blue primaries and tail. there is also a red patch on the lower belly but hard to see. Bill is grey and eyes are dark.

Very range restricted on the western side of the Central Andes of Colombia in high, mature cloud forest from approx 2,600 - 3,600m. These birds seen at 3,100m. These birds have a specialized diet mainly consisting of mistletoe berries. Mainly found within a now protected area made up of several reserves known as 'The Threatened Parrot Corridor'. As per Project Noah protocol for CR endangered species, the exact location for this spotting has been modified.

This species has an amazing story. Known from a specimen collected in 1911, was thought to be extinct for nearly 100 years. It was rediscovered in 2002 when about 60 birds were found in a fragment of mountain cloud forest. A huge gold seam was discovered at a similar time adjacent to the parrot discovery. In 2009 the 'Parrot Corridor' reserve area was established and a small area of forest next to the mining was also purchased and protected. Since then a great amount of work has been done to protect the small amount of habitat and encourage breeding by use of nest boxes. These birds appear not to thrive in captivity. Estimated global numbers have risen to between 150-250 individuals but the threat from habitat destruction (mainly from cattle grazing) still remains. Ref: Bird Life International and Rainforest Trust (this one well worth a read).

Thank you Christine and felix for your comments and apologies for the late acknowledgment.

Thank you Daniele and Project Noah for this great honour.

Congratulations - so often the beautiful creatures get all of the attention, and this little guy, so well camouflaged to his environment is stunning in his own right. This little guy is amazing, a great spotting and well-deserved accolade.

Thank you Mark and Leuba for your comments and support.

Congrats again. Your ability to find these things world-wide is truly enviable. Thanks so much for sharing them.

Thank you so much Jonathan, Brian, Christine, Rach, Antonio and Felix for your supportive comments on this spotting. As Colombia opens up to the world after so many years of being insular I believe that many there realize the value of their native flora and fauna and protection of these plants and animals is a key part to the countrys new wealth.

Fantastic spotting, Rob! Congrats and thanks for sharing, I'd never heard of this species before.

Great spotting Robert,congrats on the well deserved SOTW and thanks for sharing

Thank you so much PN rangers for voting this parrot SOTW. I know it is not the most glamorous looking critter but it is so important to create awareness for all our life forms and especially those that are critically endangered.

Congratulations on SOTW for this very special spotting!

Congratulations Robert on SOTW. Great series, spotting and information on the Fuertes parrot.

Congratulations for the SOTW. nice pics great info. I hope that this species recovers and the population increases

Congratulations Robert, this very special parrot has been voted Spotting of the Week! Thanks for bringing this amazing sighting to Project Noah:

''Lost to the world for over 90 years and rediscovered in 2002, this Fuertes's Parrot (Hapalopsittaca fuertesi) has been voted Spotting of the Week! The Fuertes's parrot is found in a very narrow range of temperate cloud forest on the western side of the Central Andes of Colombia, with an extremely small population estimated at a maximum of 250 individuals. A surge in conservation work following its rediscovery has helped its number slowly increase, but its small range and population size keep this bird extremely vulnerable. A very rare sighting, positive conservation story and excellent notes on this spotting won the votes of the Project Noah rangers team".

Thank you for this beautiful and interesting spotting. I hope the birds go well.

Thank you Ashley for the nomination and thank you Mark for the comment.

Thank you Rach and Christine for your comments and support of this spotting. This bird does blend in incredibly well into its environment.