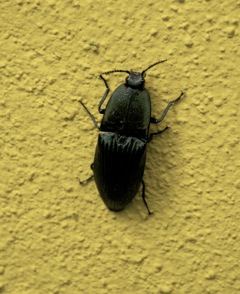 Insects in the family Elateridae are commonly called click beetles (or "typical click beetles" to distinguish them from the related Cerophytidae and Eucnemidae). Other names include elaters, snapping beetles, spring beetles or "skipjacks". They are a cosmopolitan beetle family characterized by the unusual click mechanism they possess.

Spotted on the side of the house at a finca near La Cruz, far NW Costa Rica.

Wikipedia says there are "about 9300 known species worldwide"! That's an awful lot to look through to find the exact match!

Thanks Pam for the hard work of deleting spiders & co.! Best, Torsten