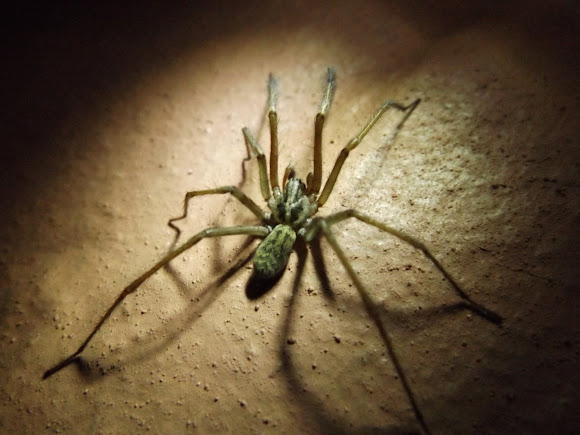 emale body size can reach 18.5 millimetres (0.73 in) in length (making it the largest members of the family), with males having a slightly smaller body at around 12 to 15 millimetres (0.47 to 0.59 in) in length. The female leg span is typically around 45 millimetres (1.8 in). The leg span of the male is highly variable, with spans between 25 to 75 millimetres (0.98 to 3.0 in) being common. The Giant house spider has the same coloration as the Domestic house spider; it has earthy tones of brown and muddy red or yellow. They also have conspicuously hairy legs, palps and abdomen.

The Giant house spider is indigenous to north western Europe. However, it was unwittingly introduced to the Pacific Northwest of North America circa 1900 due to human activity and strongly increased in numbers for the last decade. The webs built by the Giant house spider are flat and messy with a funnel at one end. The spider lurks in the funnel until a small invertebrate happens to get trapped in the web, at which point the spider runs out and attacks it. They usually build their webs in corners (on both the floor and ceiling), between boxes in basements, behind cupboards, in attics, or any other area that is rarely disturbed by large animals, or humans. Often found near window openings. Males can often be seen wandering around houses during the late summer and early autumn looking for a mate.

Oh sorry, it sounds like a weird problem you're having. Noah's works OK for me and I use Firefox through Windows 8, if that helps.

I wonder if they're going to have a forum where we can discuss problems like this eventually. Or maybe they already have, I probably haven't explored it fully yet.

or magnifying glass the stripe I was meaning is the stripe on T.agrestis that separate's it from the other species. I am quite aware how similar T.sp are. but with my noah account barely working I just about get a common name in there. I had an silver sector egg sac labelled as a money spider, Just how I am working to fix it sorry :(

As far as I'm aware David is correct - Tegs need to be examined under the microscope to be ID'd as there are several very similar species - gigantea, atrica, saeva, parietina etc. However, because they are so similar there's probably no harm leaving it as it is.
What key uses markings on the underside?

Sorry I have to get to a computers using app this came up as t. Agrestis strange. Apologies david

This male had to be flipped to see the stripe on the underside, other t. Sp have spots. I also need to update scientific name as reclassified in August last year.

This male had to be flipped to see the stripe on the underside, other t. Sp have spots. I also need to update scientific name as reclassified in August last year.