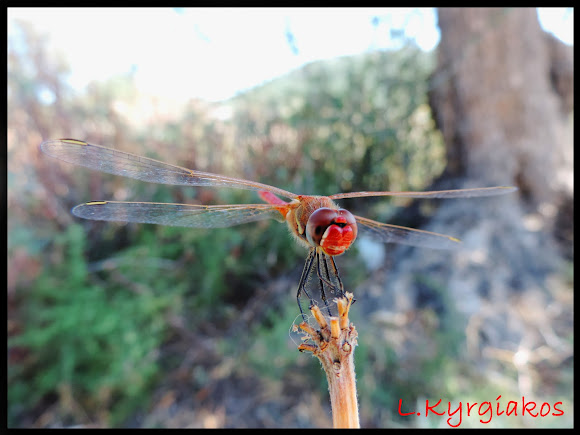 S. fonscolombii can be seen on the wing throughout the year around the Mediterranean and in the south of its range, however, its main flight period is May to October and it is scarce during the winter months. It is a territorial species with the males often sitting on an exposed perch. After copulation the pair stay in tandem for egg laying and pairs can be seen over open water with the female dipping her abdomen into the water depositing eggs. Pairs are known to fly over the sea in tandem dipping into the salt water where the eggs soon perish. The eggs and larvae develop rapidly and S. fonscolombii unlike most other European dragonflies has more than one generation a year. Source: Wikipedia!

I spotted near my home a during walking wth my dog! I was so surprised because there isn't any kind of water resourse and I also they keep staying in the same place for over 15 days. The most strange for me is that they are there around 2am-4am when the temprature in Greece is around 38oC. If anyone knows something more, please add a comment!!!

Thanasi thank you a lot for your response! It's really very intersting piece of information! Also thank you for the link of "Dragonflies and Damselflies of Greece"

Regarding the high temperatures, the behavior displayed in the second photo, with the female individual, is called "obelisk posture" and is frequently displayed to prevent overheating on sunny days.

Quoting wikipedia:
"The abdomen is raised until its tip points at the sun, minimizing the surface area exposed to solar radiation. When the sun is close to directly overhead, the vertical alignment of the insect's body suggests an obelisk."
http://en.wikipedia.org/wiki/Obelisk_pos...